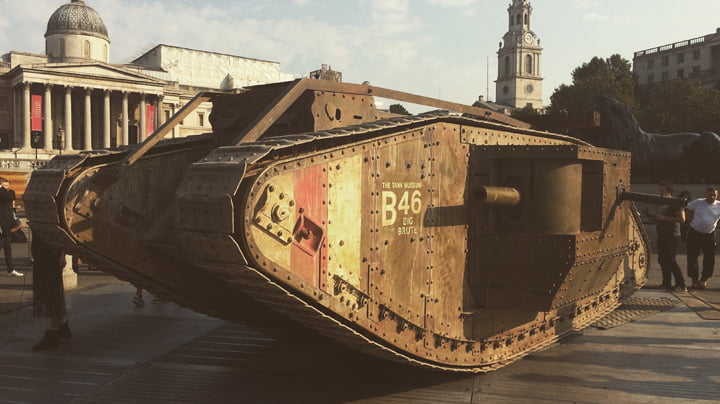 Parked under the morning sun in London’s Trafalgar Square, the replica of the Mark IV British Army tank – originally constructed for Spielberg’s War Horse – is an impressive sight. A faceless, giant hulk of metal that is formidable even when people are stood beside it posing for selfies.

Although many of these people – myself included – are there to get the latest news on the popular World of Tanks franchise, the focus of the event is firmly on commemorating the 100th anniversary of tanks being used in active service for the first time.

There’s something a little incongruous about Wargaming – makers of World of Tanks – partnering with The Tank Museum on such an occasion but fortunately, rather than being some kind of giant booth decoration, the exhibit is a sobering reminder of the important contribution tanks made to the British war effort in 1916.

Struggling against the brutalities of trench warfare, and faced with the deadly threat of machine guns and barbed wire entanglements, the British army turned to the mechanical solution of ‘landships’ in 1916 in an attempt to advance across No Man’s Land. The battle of the Somme began in July of that year, and two months later – 100 years ago this week – the first tanks rolled into action.

18 Mark I tanks were used in the last major offensive of the Somme campaign and their invulnerability to German rifle and machine gun fire gave the British Army the advantage they needed. The modest gains of 15th September, 1916 – a mere 2.3km claimed – were enough to make the case for their wider use on the Western Front.

The construction of early tanks was financed by war bonds sold across the UK. The Mark I played a vital role over the next two years in breaking the stalemate of trench warfare and bringing the First World War to a close. Once the war was over the Mark I tanks – which were rapidly becoming obsolete – were donated back to the towns and cities that funded them.

For many years they stood proudly in town squares as monuments to the bloodiest war the world had ever seen. Over time, however, they became neglected, broken down for scrap metal, and – when the Second World War began – stripped for essential materials. Of the 265 tanks donated back to the UK’s communities, only one remains, now safely secured at The Tank Museum in Bovington.

To their credit, the history and heritage of the First World War is not something Wargaming avoids. Strict historical accuracy isn’t something the company will let get in the way a good game experience, but their partnership with The Tank Museum shows that their support extends beyond video game thrills.

Announced at the event – by popular historian, Dan Snow – was a new app called Tank 100, that uses augmented reality to return First World War tanks back to the UK’s streets and squares.

In Snow’s own words, “It’s like Pokemon Go for tanks.” It’s an educational but also enjoyable mobile app that does an excellent job of demonstrating how digital technology can engage and communicate the stories of the past to new audiences.

Along with development duties, Wargaming supported Tank 100 with shoe leather, taking to the streets of Britain to track down the original locations where the retired tanks were displayed after the war. They also provided knowledge and expertise to ensure they are recreated as accurately as possible.

Tank 100 is one of a number of initiatives from Wargaming to mark the 100th anniversary. World of Tanks itself is the obvious beneficiary, with the Mark I machine coming to PC and console versions of the game,but also on the horizon is a new game event called Convoy, a new map based on the battle of the Somme, and a trench warfare mode.

World of Tanks Blitz – the mobile version of the game – will also receive commemorative content in the coming weeks, as well as additional updates featuring Soviet light tanks, a Yamato Harbour Map, new Clan tournaments and two ‘special guest tanks’ in the shape of Nameless and Edelweiss from the Valkyrie Chronicles series.

In many respects the recollections of the battle of the Somme and the latest trailers from Wargaming were uneasy bedfellows. The historical analysis from Dan Snow and Richard Smith, Director of The Tank Museum, set a tone that didn’t sit particularly well against the guitar grinding bombast of the fairly standard game-event PR that followed. And when Wargaming started to pimp out their new franchises, Hybrid Wars and Master of Orion, you could sense the audience’s patience beginning to fray.

However, Wargaming’s support for the Tank 100 anniversary is welcomed and if the event encouraged me to do anything it was get the Tank 100 app, plan a trip to the The Tank Museum and, yes, give World of Tanks another spin,

You can find out more about the Tank 100 commemorations at the The Tank Museum website.

Download the Tank 100 app from the Apple App Store or Google Play.