The headlines may have all been focused Microsoft’s Xbox One hardware announcements but its E3 booth was all about having fun.

In my report from Sony’s E3 booth I moaned – in a typically British fashion – about the lack of games you could actually see. In contrast the Xbox One booth is overflowing with titles to look at, line up for, and, most importantly, play.

In a quick circuit of the booth I noted – deep breath – Below, Deus Ex: Mankind Divided, Cuphead, Hawken, Sea of Thieves, Forza Horizon 3, Tekken 7, Final Fantasy XV, Everspace, Sniper Elite 4, Song of the Deep, Deliver us the Moon, Ghost Recon Wildlands, Outlast, Recore, Killer Instinct, and Dead Rising 4. And even that is not the complete list of playable games. The PlayStation 4 might be “For the Players” but it’s Xbox One delivering games in number on the show floor, even if many titles are multi-platform.

In terms of exclusives, Rare’s Sea of Thieves is the big draw and it’s easy to see why. The demo is simple but provides ample opportunity for some co-op tomfoolery. It felt genuinely different, successfully generating a feeling of mate-ship, even in this brief demo. Sea of Thieves already looks likes Rare’s best game in some considerable time, and was well worth the hour I waited in line.

Recore also impresses. It may not be the mysterious, awe-inspiring experience that was teased last year but it’s pacy and fun, and proudly displays the influence of its developer’s Metroid Prime roots.

There is also decent a smattering of exclusive indie titles, the pick of the bunch being the ever-fabulous Cuphead. Until the game is released it’s hard to imagine it ever not being the star of any expo it appears at. During my demo a rep promises that its much-touted difficulty level has been tweaked, hopefully giving it the chance to engage with a larger audience. Any success will be well deserved as it’s a real jewel in the Xbox One line-up.

Below, the next game from Sword & Sworcery developer Capybara Games also makes a solid first impression, but in among the hullabaloo of E3 its subtle pleasures and slower pace are not really given the opportunity to flourish. There’s enough here to keep the excitement alive however, just away from the LA circus..

And in Dead Rising 4 we have a game that, although charting highly on the dumb-o-meter, looks an infinitely more enjoyable zombie experience than the PlayStation’s Days Gone.

The biggest surprise at the booth was the relatively small line for Gear of War 4. The game is evidently struggling to build a huge buzz, despite the ever-enthusiastic messaging from Microsoft. I can’t help feel that the franchise is in decline. In fact, at about 2 P.M. on Wednesday I waited longer to see the exhibit of Xbox Design Lab controllers, but it was with good reason.

Any doubts about the appeal of the custom controller programme were quickly assuaged once I saw the final products. They look incredibly desirable and my mind is already at work creating the perfect West Ham United flavoured combination. 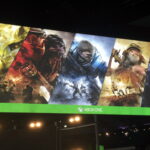 The new Xbox One S hardware was also in wide use. While I’m not mad about the white colour scheme – which, along with the ventilated section, makes it look a bit like an electric heater – its overall shape and size is an obvious improvement. We’ll take it in black, please.

Microsoft’s Xbox One may never escape its self-made sales pickle this generation, no matter how many hardware revisions they announce, but by putting games front and centre at their E3 booth they garnered a lot of goodwill from attendees. If Sony won the E3 press conference race, Xbox One caught up with its positive booth showing.

It’s also worth noting that both Sony and Microsoft’s booths were very comfortably carpeted.