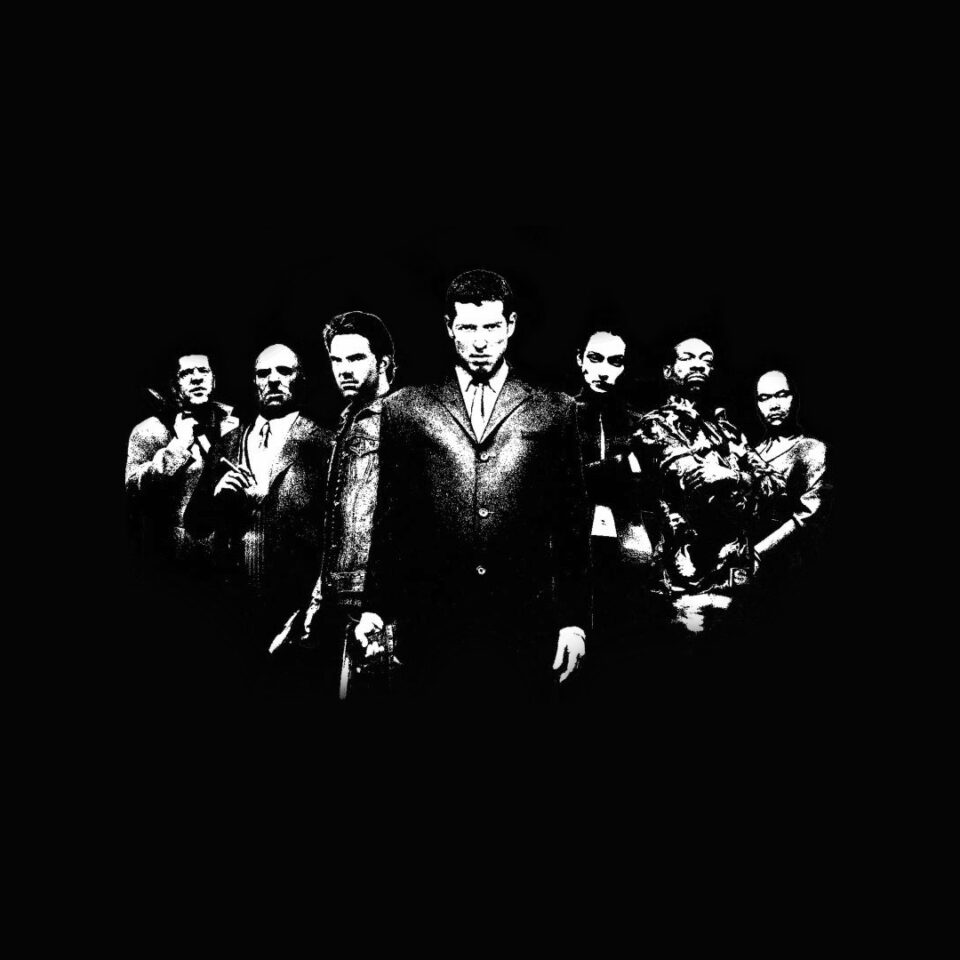 Pulp Friction: The Getaway at 20

The Getaway is now 20 years old, and it leaves a strange outline in the gaming landscape. Josh dives into what made the game special and what’s still missing now.

Shafts of colour, shifting into focus and blurring back out. Beams of black and yellow sharpen, for a second, into a rushing road. Are we in a car? Columns of cream and brown slot together, forming a block of flats. If we hadn’t already glimpsed the words “Sony Computer Entertainment presents,” we might presume this to be the opening credits of a film. But what kind of film? To judge from the music – a groovy brew of electric guitar and echoing percussion, laced with flute – a seventies crime thriller, a heist movie perhaps. The title, as it fades in, would do little to dispel that suspicion: “The Getaway.”

The names that flash up, however, are another matter. Don Kembry. Ricky Hards. Anna Edwards. Michael Preston. Joe Rice. What a list! You know instantly where you are, in the zones of budget and geography; listen to the crunching British cadence of it, and imagine the performers honing their craft in the hard-lit corridors of Casualty and Eastenders.

The Getaway, which is now twenty years old, had ambitions somewhere between the two: the stylish crime flick, in hopeless hock to the past, meets the drab and soapy present. The meeting place? London. Or, to be precise, the version of London that appears in early Guy Ritchie movies, where the interiors have a brown and murky look, as if they were shot through a glass of beer, and the outside is a catalogue of bleary greys and whites. Add the bleak fuzz that you get courtesy of the PlayStation 2, and you have a game whose action seems to crackle beneath a layer of bubble wrap.

What is that action? Well, we have shooting, with a lock-on aim and an array of punchy weapons. There is a decent peep-and-pop cover system, which doubles, during brief snatches of stealth, as a good way to stay out of sight. And naturally we have driving, which comes in many flavours. Chases, either with the police or with gang members, who like to lean out the window and shoot at you. Regular driving, with a destination in mind, in which you are harried instead by a time limit – though not a visible one; rather, one that is signalled by the stressful quickening of the soundtrack. And, last of all, there is leisurely motoring, accessed through a different mode on the menu, for it would make no sense within the bounds of the story.

I played it again, this week, and found that the years have been kind to The Getaway. Not just in how it holds up but in the outline it leaves us with; though it was received, when it first arrived, as a Grand Theft Auto wannabe, it is flattered now by the absence of games like it – in ambition, texture, and in the sharp kick of its narrative.

The plot concerns Mark Hammond, a former-mobster who went straight, only to find that London’s underworld has other plans. He is soon bent to the snarling whims of Charlie Jolson, the leader of the Bethnal Green Mob, who kidnaps Mark’s son, Alex, and uses the boy as leverage to draft Mark into a war of his own devising. Jolson is played, in voice and likeness, by Ricky Hards (packed into rubbery prosthetics), and he sucks on an endless cigar; add the double-breasted blazer that he sports, inside a long black coat, and he resembles the sore third place in a Churchill-lookalike contest. In lengthy cutscenes, Jolson lounges in his clubhouse and expounds the rules of the game.

These are clear, simple, and they sound, as Jolson points out, a bit like Simon Says. “I ring you, you do the job. You don’t do what I tell you, the kid dies. You don’t do it where I tell you, the kid dies. You don’t do it when I tell you, the kid dies! You getting my drift?” It’s not a bad pitch for a crime game, and it’s no surprise that these rules adorn the back of the box, along with a host of telling details. There are three screenshots, two of which are taken from cutscenes. There is a fourth screenshot, near the bottom, demonstrating the game’s aspect ratio, plus a caption informing us that The Getaway “has been created in a widescreen ratio to enhance the full width of the playing screen.” There are also credits, printed in the billing-block style that you get on movie posters – the last name of which is that of the game’s director, Brendan McNamara. And, of course, the blood-red badge of an “18” certificate, issued by the BBFC, with which the overall effect is crowned: walk out of a shop with a copy, and you could pass for a movie nut with a penchant for gangster flicks.

Indeed, there is an air of pretention around The Getaway, a pained attempt to elevate a mere video game to “grown-up” status. Hence the live-action trailer for it that played in cinemas, back in 2002, and closed with the question: “When is a game more than a game?” To which the answer, I guess, is: When you pay some actors to race around London toting prop guns. Still, that approach was doubtless appreciated by Sony, who took aim at a more adult crowd. There was a small collection of games, in the early millennium, that epitomised that goal and seemed impossible to separate from the PS2. Titles like Gran Turismo 3: A-Spec and Grand Theft Auto III pitched video games as unreachably adult pursuits. Even when fairy tales found their way onto the console, they too – as proven by Ico – could be inked with shadow and drained of childish slush.

The Getaway belongs in this band. (The fact that the dark bulk of the PS2 resembles one of Jolson’s heavies is a happy coincidence.) One reason that it proves such good company now is that it’s coarsened by the touch of pulp. Two minutes with its mobsters is enough to convince you that no one – in London or anywhere else – actually speaks like that. But you buy the shared illusion, the sense that they are all locked into dirty jobs and lashed onward toward grim fates. I always get the same feeling with L.A. Noire, McNamara’s spiritual successor to The Getaway, which centred on a detective who picked his way through grisly murder scenes. The plot of that game always slips my mind, the characters are like movie-coloured sketches, and nothing in it gets near to real suffering; but what burns in the memory like a flashbulb is the look of real suffering, artfully staged – circumstantial evidence, so to speak, from which we draw our impressions.

If McNamara is a cinematic developer, it isn’t because, like Hideo Kojima, he jams his games with homage to the films that hum in his head; it’s because the effect he achieves is only possible in motion. Both of the games he has directed feature open worlds, yet neither is an open-world game. Rather, they use their terrain like a loop of film, an unreeling plane on which the magic shines through. It’s no surprise that both games come alive in cars, gaining imaginative traction and coughing up fumes of feeling.

There isn’t anything, in games, quite like the London of The Getaway. The mood that descends as you drive through it is part-dream and part-dreary reality. Other developers have tried to capture the place: the strange filtration, the patches of half-hearted rain, and the bubble of its cultural stew. Ubisoft has made repeat visits, with a couple of Assassin’s Creed outings and Watch Dogs: Legion. 873 A.D. was all moss-furred brick and Roman relics; 1868 brought puffing chimneys and carriage clatter; and the 2020s, apparently, will mean holograms that throb like a headache. But the problem with these visions is the fizz of fruitful unrest on the streets. In winning French fashion, the citizens are always rising up, against ghoulish regimes or plotting Templars, and the place is brightened into borderline fantasy with the effort.

What the developer Team Soho gets right is the understanding that a dour look doesn’t mean a defeated spirit. Its depiction of London is steeped in the humdrum, but it knows that therein lies the glory. Drive a Citroën Saxo, in urine yellow, into a swirl of one-way traffic, and, against the odds, you feel the flush of romance. Hammond’s missions are a list of soul-killing chores – drive there, steal that, burn this down, shoot them, etc. – but the backdrop is anything but draining, and you come away from The Getaway feeling oddly pumped and gunning for more. That’s what good pulp does; it drags you into low lives and leaves you in high spirits.

So, the answer is simple. We need a linear, crime-infested tale, set in a non-linear recreation of London. We need a studio that knows the turf, and a director in thrall to style. We need a budget. And we need a publisher, whether it be Sony or someone else, to let that studio make a big game of Simon Says. You getting my drift?