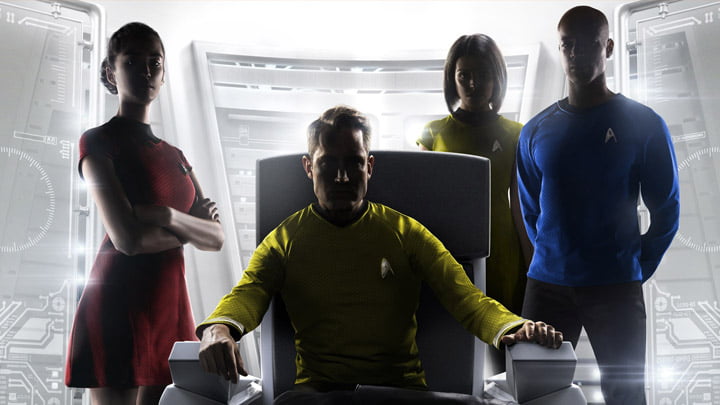 How Red Storm Entertainment are bringing the Star Trek universe to virtual reality.

Star Trek: Bridge Crew casts the player as one of four officers on the bridge of the USS Aegis, a brand new Starfleet vessel created for the game in conjunction with franchise owner, CBS – although the original series Enterprise is also available. Players can choose to take on the role of Helm Officer, who pilots the ship and manages impulse and warp travel,  Tactical Officer, who operates weapons, shields and scanners, Engineer, who distributes power and manages repairs, or Captain, who is the, erm, captain (and gets the biggest chair).

In developing Star Trek: Bridge Crew, Posey said there were a number of elements that were important to the development team. First, was an authentic sense of immersion, particularly important in a franchise as beloved as Star Trek.

“As game devs we talk about immersion, which is engaging our players enough so that controllers and screens disappear,” says Posey.

“It turns out, with VR, that’s practically free.”

An example of this can be found right at the start of the game, which begins with players taking a slow orbit around a space station and the iconic starship Enterprise.

“Being devs, we hop in there and beep-boop our way around real quick, and we’re onto the next thing,” says Posey.

“But as we started taking this the public, and started giving demos, we found that players were wanting to spend three, five, seven, ten minutes just in the shuttle.”

According to Posey there were multiple occasions in which players had to remove their head-sets to wipe away tears.

“It really surprised us, the emotional impact this franchise has on people. It literally is a dream come true for some people. It opened our eyes to how much we needed to respect and give people breathing room to fully appreciate the experience that they were having.”

This meant the team had to rein in the traditional urge to pressurise players and distract them with too much to do too soon. Players need a little time just to enjoy being in Star Trek. The tropes of the franchise also had an impact on the mechanics the game uses to deliver narrative information.

“There’s this well-known, and generally accepted solution in games, which is basically having some authority figure somewhere far away telling you everything you need to know,” says Posey.

“The good news is, the Star Trek franchise gave us a great solution for this. And that was the Starfleet admiral on the view screen. People talking to you on the view screen is in pretty much all Star Trek properties at some point, so that was great, and it was a good way we could use the franchise.”

Unfortunately, what appeared to be an instant win wasn’t nearly as effective in VR as it might be in a traditional video game.

“The bad news was that in a shared virtual environment no one wants to listen to a talking head,” says Posey.

“When you have multiple people in VR, and that sense that you are all there together in a shared environment is so strong, I think that contrast in natural human interaction and some guy on a screen talking to you, who is not human, is so stark that this method of delivering information was just not as compelling.”

It’s a good example of how developing a game for VR is re-writing the rule book for developers. The admiral does remain in the game, but is now used sparingly to impart broader narrative information, rather than mission critical briefings.

“This left us with a couple of needs. One was to provide narrative context for missions and moment-to-moment gameplay. And the other was with directing player action,” says Posey.

On the first point, the Star Trek franchise came to the rescue again with the perfect narrative gift: the Captain’s Log.

“Each of our missions starts with a Captain’s Log, which really is really just an establishing shot, a voice over from the Captain. This was great for us as it really roots the experience in something that’s familiar and iconic.”

On the second challenge, the team decided to make a bold gameplay decision, one worthy of Kirk himself.

“Here we decide to take a little bit of a risk,” Posey reveals. “And that was entrusting our captains to actually help us as story tellers. Which, of course, means entrusting a human player to actually pull information and share that with the crew, and do that in a way that contributes to the overall narrative experience.”

As such the player who assumes to role of captain has a wider selection of in-game displays and information. They’re half Star Trek captain, half dungeon master. Posey hopes that this responsibility will encourage players to think and behave accordingly.

“In some situations there’s not a clear right answer for solving situations. It’s the classic, ‘Do you risk your own crew to rescue some civilians in harms way?’ scenario. And it’s really up to the captain to make that decision,” he says.

Play testing suggests that the choice has paid off, and good captains – people who are decisive and can quickly assess what to do – tend to lead successful crews.

“It was very important for us to continually bring our thinking back to the cooperation of the crew, to capture that experience of all of users working together. We also wanted to empower players with a sense of responsibility, that they were out there to do the ‘proper things’.”

Despite the importance of the captain, Red Storm went to pains to ensure that every player feels like they are making an important contribution to the success of each mission.

In determining the structure of the missions, the team focused on what makes Star Trek, well, Star Trek. Naturally, the responses were as wide and varied as you might expect, but this variety was in fact beneficial to the overall campaign design.

“It kept coming back to that episodic approach,” says Posey. “This led us to taking a flipped approach to mission design and narrative design. Once we figured out what those experiences were, we rearranged them in a way that gave us a nice long-term narrative arc that felt like a season.”

Although not every mission features every iconic Star Trek moment, the campaign as a whole does. Posey hopes this well ensure it has variety, and that players will argue over which mission is best, just as they might with TV episodes.

The missions in Star Trek: Bridge Crew are built around a three-point structure of concern, complication and crisis. As missions progress, the narrative escalates to a decision point for the captain. From there it is important that the crew works together. Posey uses the example of simply taking a starship into warp.

“Going to warp requires Helm and Engineering to work together, to go through this protocol. And what we found was that after a couple of play throughs, people would start to develop this cadence and patter as a crew when they’re hitting their marks,” says Posey.

“That co-ordination of the team adds to the authenticity that we’re looking for. It starts to feel like a crew because it sounds like a crew.”

The result is that Star Trek: Bridge Crew is immersive, not just because it’s in virtual reality, but because it also fosters comradeship, team work, and shared responsibility.

Star Trek: Bridge Crew will be released on PlayStation VR, Oculus Rift, and HTC Vive on May 30, 2017. Get the game’s PC system requirements,