Sorry CliffyB: We worked it out, we know it’s Lawbreakers.

Cliff Bleszinski – industry legend and creator of the Gears Of War series, among other things – announced several months ago that his newest venture, and first with his own studio Boss Key Productions, would be a free-to-play first person shooter. CliffyB also announced that he’d entered into a partnership with Nexon, a purveyor of free-to-play-only games, to bring Project Bluestreak to market.

Today, we’ve had the exciting news that a countdown clock has started for Project Bluestreak, under a section of the Nexon site called The Shattering.

There’s also a tasty little The Shattering countdown clock running, and while the excitement isn’t as palpable as the Fallout 4 countdown clock (Please Stand By) the fact that the first stage of the announcement will be here in… about 45 minutes is great news.

So there’ll be a Project Bluestreak/The Shattering release at 12PM Eastern over the next three days (so far) and by the time this week’s over – interestingly, the week in which one of CliffyB’s biggest smashes, the original Gears Of War sees a HD remaster on Xbox One – we’ll know an awful lot more about the newest free-to-play FPS to join the fray.

Interestingly Boss Key registered two trademarks last year – Lawbreakers and Kinematic – so those could be likely contenders. We asked CliffyB on Twitter but there has been no response as of yet, and this was his response:

We’re pressing the man himself for further answers. You saw it here first, folks!

@therealcliffyb So, by making that tweet a favourite, are you confirming that we're correct with one of our guesses? And if so, which one..?

And he made that tweet a favourite too! So we’re clearly right that Project BlueStreak is either Kinematic or Lawbreakers – CliffyB just won’t confirm which one it is!

We did a bit of a dance with CliffyB on Twitter on Monday around potential names for Project BlueStreak, once everyone had established it wasn’t the Shattering. Somebody asked CliffyB if anybody had guessed the name right yet, and he said they hadn’t.

We knew from the US Patent Office’s online search that Boss Key Productions had registered two trademarks in late 2014 – Kinematic and Lawbreakers – but we didn’t know which one Project BlueStreak was, and CliffyB wasn’t inclined to give the secret away. He just kept responding to our tweets by making them favourites, the coy fellow; he was effectively saying “Yes, you’re right, but I don’t want to spoil the surprise”.

Well this morning a DNS change at Nexon – DNS stands for Domain Name System, that’s the friendly names websites have so we don’t have to remember IP addresses for everything – has confirmed that Project BlueStreak is in fact Lawbreakers.

How do we know? Well, here’s what happens if you ping – that’s literally like a submarine sonar ping, sending a small chunk of data to a server to see if you get a response – the main Nexon website:

FYI, the fact it’s not responding (we’re receiving ‘request timed out’ messages) isn’t an issue. That just means that Nexon have very sensibly set their servers not to respond to such things, in case it’s malicious folk trying to attack them.

But what it does do, is show that the DNS record for nexon.net converts to the IP address of the server which hosts it. That’s basically as solid confirmation as you can get that a DNS name is pointing somewhere.

Nexon traditionally host all their sites as subdomains of the main Nexon domain – that is to say, they’re gamename.nexon.net, e.g. theshattering.nexon.net – it’s a more efficient way of hosting multiple properties, and means you only have to maintain one set of SSL certificates, which are expensive to buy and maintain.

So what happens if we ping lawbreakers.nexon.net? This:

It goes to a different back-end server than the main Nexon site (which is expected; CliffyB’s game is likely to draw in a whole load of traffic) and it still (very sensibly) doesn’t actually send a response, but you can see that the DNS entry for lawbreakers.nexon.net resolves to an actual server.

This effectively confirms that Nexon are going to be hosting a game called Lawbreakers on behalf of Boss Key Productions. And if you need any more proof?

Kinematic – the other trademark registered by Boss Key at the same time as Lawbreakers – doesn’t go anywhere at all.

Want to acquaint yourself with CliffyB’s back catalogue? Why not grab the remastered Gears Of War Ultimate Edition for Xbox One.

Boss Key, the developer behind LawBreakers and the new battle royale game Radical Heights, is closing down.
1 minute read

Cliff Blezinski to Epic: “Stop trying to hire away my team”

Cliff Blezinski, creative director of the Gears of War series, has accused his former company of poaching his team.
1 minute read 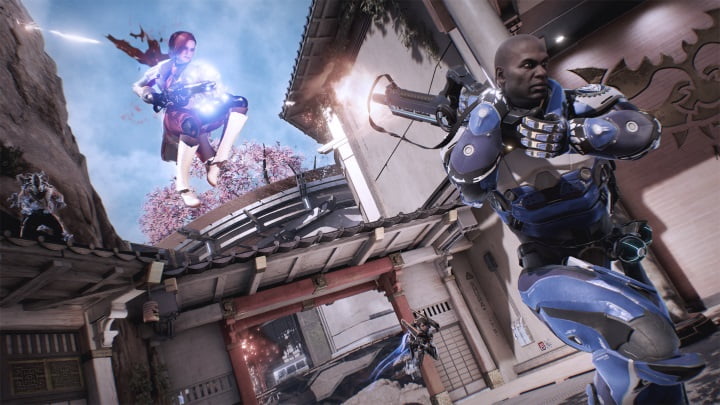 CliffyB’s LawBreakers won’t be free-to-play after all

After a change of heart from Boss Key Productions and publisher Nexon, CliffyB announces to GDC 2016 that LawBreakers won't be free-to-play after all.
2 minute read
© 2022 Thumbsticks | Interesting articles about video games.