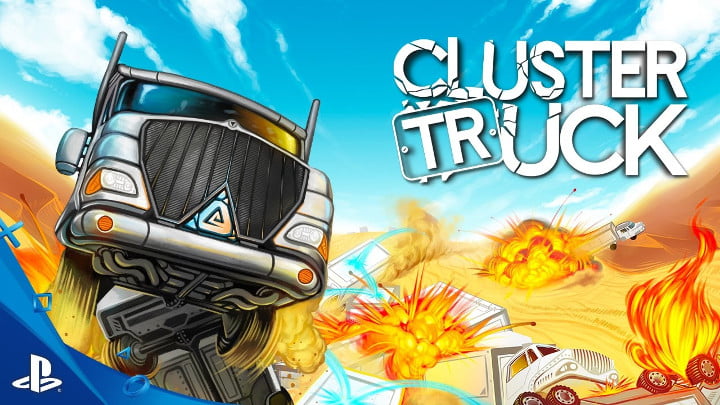 The premise of Clustertruck is delightfully simple: get from one end of the level to the other, without falling off the trucks. The reality? It’s much more difficult than that, and frankly, rather chaotic. If you picture it as that childhood game where the floor is lava, but jumble it up with some of the practical stunts in the stellar Mad Max: Fury Road, and you’ve got something close to the action on offer here.

While you progress along the backs of the eponymous Clustertrucks they’re busy banging the living daylights out of one another – crashing into walls, trees, pillars, driving off cliffs, into water – basically, doing anything they can to throw you off. It’s like a bucking bronco mixed with the movie Convoy, and that’s possibly the best thing ever.

Clustertruck is mayhem. It’s bedlam. It’s abject absurdity, and it’s fantastic for it.

In another guise, Clustertruck might have been a puzzle game. The principle is very similar to something like Angry Birds – you only having a limited number of available moves before the level is beyond saving, in an environment that is constantly shifting with a degree of randomness outside of the level designer’s original plans – but it happens at high speed, in first-person, on the back of trucks. Everything is basically improved at high speed, with the peril of hundreds of tonnes of heavy metal.

Clustertruck is great fun to play, if a little intentionally infuriating at times, and the constant, exasperating peril makes for hilarious watching on YouTube and Twitch. If that wasn’t enough, the PC version also supports level creation with Steam Workshop support, so you can create, download, and share your own truck-based insanity.