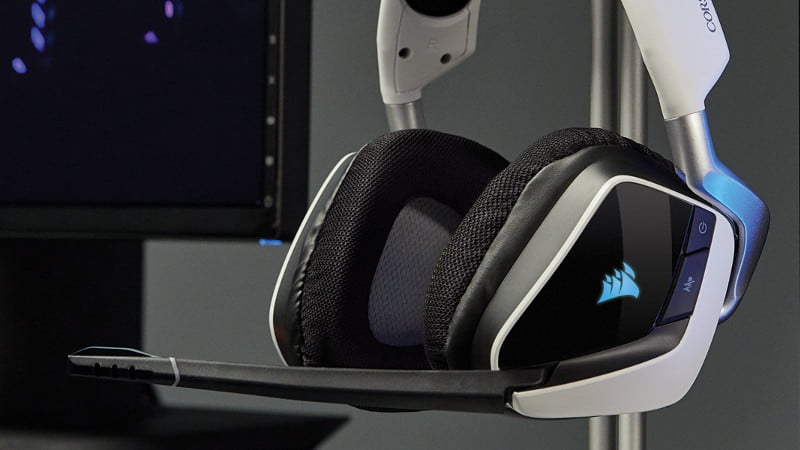 Check out the new line of Corsair Void Pro headsets, which include RGB lighting options! (It’s less terrible than it sounds.)

Ah, RGB lighting, the tech equivalent of putting makeup on a pig. Somewhere in video game history, someone decided that putting a radioactive rainbow glow on everything would make it cooler. You know, kind of like an explosion in a neon sign factory, but less tasteful.

And now, for some reason, Corsair have put RBG lighting into a gaming headset. I often worry that my ears just don’t luminesce enough, and I’m sure you all do too.

But it’s not all bad. The Corsair Void Pro headsets look rather swish, and you can get them in both RGB and non-RGB lit variants. And the RBG lighting, as pointless as it may be, is actually rather neatly done here, with just a gentle glow from the Corsair ‘sails’ logo on the outside.

But more important than the glow-in-the-dark frippery are the headsets themselves, so what’s on offer with the new Corsair Void Pro?

The Void Pro Wireless SE is the top of the Corsair Void Pro tree, and in addition to 2.4GHz wireless connectivity, 7.1 surround sound, and that all-important RGB lighting, it comes in a natty yellow colour. Like a wasp, or the Fiat Cinquecento from The Inbetweeners. Except cooler, obviously.

The Void Pro RGB Wireless is basically the same as the Special Edition – complete with wireless connectivity, surround sound, and the shiny, shiny lights – but instead of yellow, it comes in white or ‘carbon’. Which is, you know, grey by any other name. Looks slick, though!

The Void Pro RGB USB is exactly the same as the Void Pro RGB Wireless – including both white and ‘carbon’ colour variants – except that it’s not wireless. It uses USB connectivity instead, which does mean you’ll be tethered within a few feet of your PC; also, it’ll never run out of charge.

The Void Pro Surround is the base model in the range, but you could argue it offers the best value, because not only is it the cheapest with the same technical spec as the others, you’re not paying a premium for any of that light-up nonsense or yellow plastic. It’s also a mixed connectivity device, with a choice of USB or 3.5mm stereo connectivity, meaning you can use it with other devices too. It also comes in a neat red colour, in addition to the ‘carbon’ design; there’s no white on offer here.

The Corsair Void Pro headsets are available to purchase now from the Corsair website, though, at the time of writing, they all appear to be out of stock, on the UK site at least. Maybe you’ll fare better in your region!