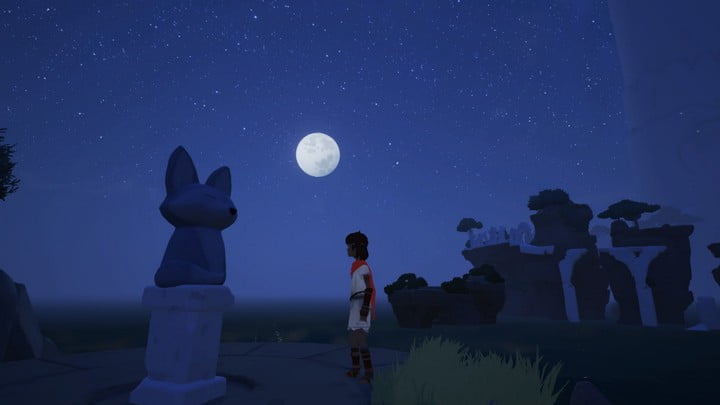 Fair warning: This post is going to contain some pretty significant spoilers for Rime. Proceed at your own risk.

Does the fox die in Rime?

This may seem inconsequential to you. The fox is, after all, just a collection of pixels and polygons – albeit coloured orange and arranged into an adorable animal form – in a video game. It’s a work of fiction. You could argue that it doesn’t matter.

But there are some sensitive souls out there, myself included, who really don’t like things where the animal dies. Seriously, there’s a whole site dedicated to it. It used to be called doesthedogdie.com – now it’s an animal-specific category at movieswhere.com – and it allows you to check out whether the dog (or other beloved creature) dies in a work of fiction, so then you can decide if you want to put yourself through the trauma or not.

But video games aren’t all that well-represented in these circles, which is strange, because you can grow a lot more attached to a companion creature in an interactive work of fiction. This is where we step in: we’ve already covered if Trico dies in The Last Guardian, and how to prevent the wolf – who absolutely can die – from meeting his maker in Until Dawn.

And today, it’s the turn of Rime, the platform puzzle adventure game from Tequila Works with an adorable, magic orange fox, woken from his island slumber by activating four fox statues in the game’s opening chapter.

But first, some images from the game, to bump the spoiler-filled content well down the page, so nobody can stumble upon it by accident if they’d rather not know.

Final warning: There will be many spoilers about the content and ending of Rime. Proceed at your own risk, folks.

Seriously, this is your last warning: Only proceed if you’re prepared to have the whole of Rime spoiled.

Does the fox die in Rime?

Yes, the fox does die in Rime.

And so do the spindly, lady-legs eye robots that the kid befriends in the tower.

But it doesn’t matter, because…

I’m going to elaborate on that in a moment, but first, another spoiler warning, and more images to bump the spoilers down the page: I’m now going to spoil the hell out of Rime’s story and it’s ending, because it really rather upset me and I couldn’t adequately express it in my spoiler-free review. You have been warned.

Seriously. Turn back now if you don’t want to have the ending of Rime spoiled.

… it doesn’t matter that the fox and the lady-legs eye robots die, because none of it’s real, and the kid’s fucking dead the whole time anyway.

Confused? Allow me to elucidate.

What’s going on with the ending to Rime?

Rime is one of those puzzle box games, where figuring out what’s going on is more challenging than the actual puzzles in its gameplay. It’s a game with no exposition, no spoken dialogue, centring on a very confused child following a bright orange fox, ultimately chasing a shadowy figure in a red cape to find an answer to who they are and why they came to be stranded on this island.

We learn through flashbacks that the child was caught in an accident, their small boat whipped up in a violent squall on the ocean. That’s how they came to be washed up on the shore. But the child wasn’t alone on the boat, and further flashbacks – combined with the ever elusive red cloaked figure – lead us to believe that the child’s parent was washed overboard. The red cloth the child wears as a cape is a piece torn from their parent’s cloak, as the child tried desperately to haul them back overboard.

At this point we’re all probably assuming that the red cloaked figure isn’t really present on the island, rather, that they’re a figment of the child’s imagination. So far, so distressing, but at least the child is alive and they’ve got friends, in the form of a magical orange fox and the lady-legs eye robots awoken from their slumber in the tower.

The lady-legs eye robots are the first to go. After forming a bond with one of them, combining to solve puzzles and escape the bowels of the tower, the child and their robot friend wake several more robots, and they go on a purposeful march towards the endgame. As they trudge through the rain, they come up against doors that can’t be opened without a giant key; a familiar motif we’ve seen throughout the game.

Then, one by one, the robots step into the keyholes in the doors, sacrificing themselves to allow the child to progress, until just our child, the fox, and the first of the robots is left. The child tries to stop the robot from going, clutching vainly at its legs, but the robot is fulfilling its purpose. This is what it was put on this world to do and, as the fox consoles the child, the robot is ripped in two as the door opens.

Then we find ourselves in a wide open courtyard, filled with the Dementor-like creatures who tried to kill the child by sucking out its soul in the tower (shortly after the segment of the game where the child was terrorised by a giant bird of prey; did I mention that Rime gets really dark?). It’s been a rough journey, but here, the Dementors aren’t particularly interested. They seem lost, confused, impotent.

Four bright shafts of light pierce the sky, guiding the child where to go next. Upon finding the first one, you’re joined by your fox buddy, who barks at the shining statue, encouraging the kid to do the same. The child complies, and the fox, visibly looking tired, curls up for a little rest.

When I found the second statue, I instantly realised what was going on. These are four statues of small children, mirroring the four statues of the fox from the opening chapter. I activated four fox statues in the opening created the fox, and now, the fox is activating four child statues, looking visibly weaker with each bark.

If I wasn’t reviewing the game, I would have stopped there. I knew the fox’s number was up and – like my wife, who can’t watch the last twenty minutes of Marley and Me because it’s too upsetting – I would’ve just turned the console off and stopped playing. The fox can’t be dead, if you don’t see it die.

But I was writing a review and I had to persevere to the end. I activated the fourth statue, and the fox died in my arms. Then the child’s skin turned pitch black, like the Dementors, and I was faced with one final tower puzzle as they loomed in a doorway, preventing me from leaving.

Cut back to that sequence, that memory from the boat, of the parent going overboard. Only this time, we’re in the shoes of the child’s father, and it is the child who goes overboard. The father clutches, plaintively, coming away with a strip of red cloth. The child’s cloak from their time on the island. This is the terrible truth of Rime.

Now we’re the child, atop a great tower, staring down into the void. The Dementors are throwing themselves down into the blackness, but I cannot move away. Like the sequence in Final Fantasy VII where Sephiroth is making Cloud attack Aerith, no matter how hard you fight it, the only thing I can do is to dive over the edge, into the abyss.

The child is gone.

Cut back to the parent, in their home by the sea, and the father unlocks the child’s bedroom, clearly empty and still, absent of joy and laughter since they were lost at sea. The father leans towards the window, with the scrap of red cloth in his hand and – like the dive into the abyss – all I can do is let it go, into the breeze.

The father is letting go of their lost child, and the journey is complete.

So what the hell does all that mean?

There are, broadly speaking, three interpretations of the ending of Rime that I can come up with:

I don’t think it’s the first one, because that’s pretty literal, even for a medium as oft-unsubtle as video games. It could feasibly be the second one, but the child wouldn’t be wearing the shred of red cloth they left with their father, and it doesn’t follow that the parent letting the red cloth go coincides with the end of the child’s dream journey.

So, by process of elimination, it must be option three. It’s the only thing that makes sense. The child’s letting go and diving into nothingness is inextricably linked with the parent letting go of the red cloth. The father is letting his child go, releasing his grief and allowing his child into the afterlife, and into peace.

Which could be fine. Not all stories have to have a happy ending, and you could argue that a parent being able to let go of their grief could be seen as a good ending, but not here. Not like this.

Why would the child’s journey into the afterlife be so painful? Why would the kid die over and over, plucked by terrifying birds or bled dry of their soul by faceless demons? Why would, in reaching the afterlife, everyone the child knew and loved in their final moments be taken away from them? I appreciate that the game needed some challenge and conflict to function as an actual game, but after a beautiful start the journey was so grim, and the ending so painful, it left me feeling hollow and sick.

If this was all the parent’s dream, their imagination of where their child went after they died and how they got to the next life, shouldn’t it have been less fucking harrowing?

Wouldn’t a better arrival in the afterlife have been the child having a jolly nice time on an island, chasing seagulls and baby humbug pigs, with a spritely fox companion and lady-legs eye robots by their side for the rest of eternity?

Couldn’t they at least have left the child and the fox together?