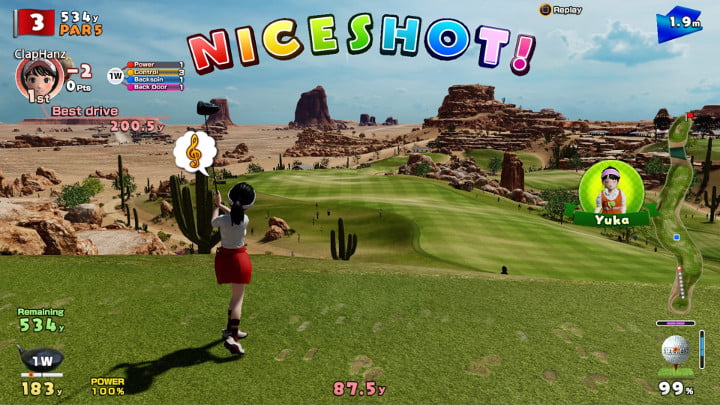 Forget Tiger Woods or Rory McIlroy; the Everybody’s Golf PS4 version is the golf game we’re all waiting for.

Golf doesn’t exactly have a great reputation for inclusivity. Only last year – that’s 2016, for crying out loud – Muirfield Golf Club was dropped from the Open rotation, because of a vote by their members to continue to refuse female memberships at the club.

And quite right, too. That’s absolutely the right thing for the R&A to do. It’s the 21st century, and Muirfield deserves to drop into the bloody ocean. Anyway – back to video games.

While most golf games are quite serious, and usually have some sort of celebrity endorsement attached with them, the Everybody’s Golf series – known as Hot Shots Golf in its native Japan – is a bastion of fun and accessibility.

To anyone who’s ever played a golf video game Everybody’s Golf is instantly familiar, with that three-click swing mechanic, course and equipment unlocks, and character progression. But Everybody’s Golf is better than most other golf games. Not specifically because it plays better than other golf games (though, in all honesty, it probably does) but because it’s an absolute blast to play. It’s also quirky, loud, silly, and vibrant (just like John Daly’s trousers).

And the Everybody’s Golf PS4 version is looking like more of the same, with honking great bells on it. Based on the release date trailer above, those bells include generally larking about, pootling around in golf carts, swimming in azure blue seas alongside a lovely yacht, and strolling around the world’s most kawaii golf resorts.

In reality, this is exactly what the real world of golf needs, but don’t expect to see it any time soon. At least we’ve got the game; the Everybody’s Golf PS4 version launches on August 30, 2017.