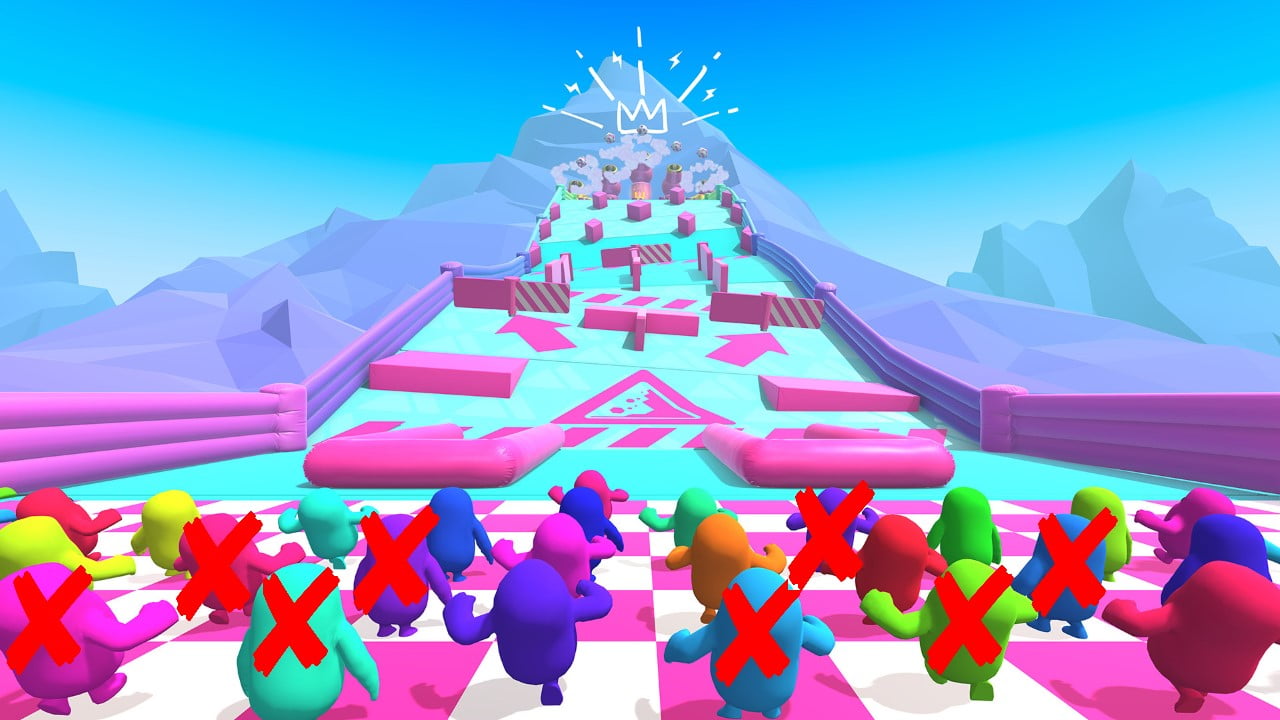 Mediatonic: “100 players became this talismanic number we decided to aim for … and two years ago was the standard for all Battle Royale titles.”

Fall Guys isn’t strictly a Battle Royale game. But in the world of video games, having a strong elevator pitch to grab people’s attention is–

Hey, where are you going? Get back here. We’ve not finished!

See? Getting off to a slick start and having a strong elevator pitch to grab people’s attention is crucial. There are thousands of video games released every year and attention spans are worse than ever. Being able to sell someone on your concept in a matter of seconds can be the difference between success and failure, so a simple formula of “it’s like X, crossed with Y” or “what if X was a Battle Royale game?” becomes a simple, effective way to get your idea across.

So while Fall Guys isn’t technically a Battle Royale, the elevator pitch might use the “100 people battle it out, but there can be only one winner” motif to illustrate its structure.

Somewhere along the line – we’re going to blame Brendan Greene – it was determined that Battle Royale games would involve 100 players. It’s a weird one, because the movie that inspired it all – Kinji Fukasaku’s Battle Royale – featured a bus full of schoolchildren, just a single class. That can’t be more than 30, 40 kids? Meanwhile, Suzanne Collins’ The Hunger Games – which she swears she didn’t copy from Battle Royale, honest – features just 24 children, two from a dozen districts in a dystopian North America. But 100 became the arbitrary standard in Battle Royale games, because Brendan said so. (And then Fortnite Battle Royale copied his homework.)

In a post on its development blog, Mediatonic has announced that it will be buck the trend and drop the Fall Guys player count from 100 to 60.

“When we first started working on Fall Guys we had to ballpark our player count based purely on what felt right to us,” says Joe Walsh, game designer at Mediatonic, “and 100 players became this talismanic number we decided to aim for. ‘100 players, 1 winner’ instantly gives players a sense of the mayhem they’re going to deal with, and two years ago was the standard for all Battle Royale titles (Fall Guys isn’t a battle royale per sé, but when explaining the game for the first time it helps to draw those parallels).

“Once we started prototyping gameplay we quickly we found that players couldn’t really tell the difference between 50 and 100 contestants. Regularly we’d ask players ‘how many Fall Guys did that feel like you were playing with?’ and their response was often twice as high as the actual number that were in-game with them. It turned out that we didn’t need as many players as we thought to create the crowds we wanted the gameplay to include.

“We also began to find that 100 players made even our simplest levels too crowded and ultimately less fun. Players would lose their Fall Guy in giant bundles trying to fit through small gaps, and if we made our levels bigger they were too large and cavernous to feel cohesive. Once we reduced player counts to 60 we found the horde of Fall Guys still invoked all the craziness we wanted, but without any of the frustration and confusion that the extra 40 Fall Guys brought with them.”

So there you have it. After extensive playtesting Mediatonic determined that, Fall Guys plays better with 60 players than 100. It also brings other benefits, including reduced matchmaking times, and giving everyone a better chance of winning. (Odds of 1 in 60 are better than 1 in 100, obviously.)

We’re not phased by the reduction in numbers, to be honest. We played Fall Guys with a handful of people in a soft play area in Devolver Digital’s car park near E3 2019, and we had a lovely time of it!