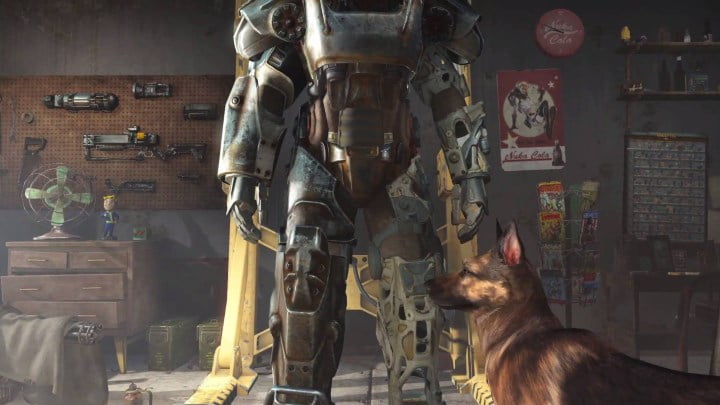 A handy who’s who guide to the prominent Fallout factions.

The post-apocalyptic wastes of Fallout are filled with all manner of factions, organisations, and bag-full-of-rabid-ferret-angry lunatics out to kill you. But they’re not all bad. Let’s have a look at the already-established Fallout factions, and see who – aside from your trusty dog – you might be able to rely on in Fallout 4.

The Brotherhood of Steel are (nominally speaking, in a world of grey areas) the “good guys” of the Fallout universe. A quasi-religious order, somewhat reminiscent of the Knights Templar, the Brotherhood of Steel’s chapters worship at the altar of technology; their Scribes, Knights and Paladins have inadvertently found themselves in the role of wasteland peace-keepers – along with the player character – while performing their technology preservation duties.

The Brotherhood of Steel was founded in 2077 by Roger Maxson, then a captain in the United States Army, as a response to the discovery of West-Tek scientists use of human experimentation for their Forced Evolutionary Virus (F.E.V) that would ultimately lead to the creation of Super Mutants. Over the years, the Brotherhood of Steel have been in conflict with most other Fallout factions, including prominent raider groups like the Vipers, the NCR, the Enclave and most famously, the Master and his Super Mutant army.

Chance of appearance in Fallout 4: 100% – they’re definitely in it.

If the Brotherhood of Steel are the “good guys” in the wastes, then the Enclave are their opposites. The Enclave claims to be the legal continuation of the United States government, and in many cases, its numbers were directly descended from members of the standing government when the bombs fell. The Enclave took refuge on an oil rig off the West Coast, waiting for their opportunity to return to prominence.

When they discovered samples of the Forced Evolutionary Virus, they planned to unleash a modified version onto the continental United States from their rig and wait for the land to become free again; in so doing, they inadvertently created a second generation of Super Mutants, and were ultimately thwarted by the Chosen One. After re-locating to the Capitol Wasteland, they attempted a similar trick with the Garden of Eden Creation Kit (G.E.C.K) and the Project Purity water system. They also have a habit of experimenting on Deathclaws to make them more deadly. As I said, they’re the bad guys.

Chance of appearance in Fallout 4: 95% – they’re like a bad penny, and will always keep coming back.

You could argue that Super Mutants aren’t strictly a Fallout faction – not any more, at least – but it’s hard to ignore them in the wasteland. Originally created by the West-Tek group as a result of testing on the Forced Evolutionary Virus, the Super Mutants banded together under the direction of the Master in an attempt to mutate the population of the United States into one species, or kill anyone who resisted or was not successfully mutated.

The Master and his Super Mutant army were eventually defeated, but Super Mutants still roam the wasteland. Some of them have banded into organised groups or communities, but even in this disparate, disorganised state Super Mutants – and in particular, giant Behemoths – are a major threat in the Wasteland.

The New California Republic is the most civilised and (to our modern sensibilities) familiar Fallout faction. In comparison with how the rest of the continental United States had fared following the Great War, the NCR is a prosperous, fair and liberal society. The New California Republic was formed from the remains of Vault 15, originally as a walled settlement known as Shady Sands, before growing into a collection of states spanning from Northern Mexico to Oregon.

Though their ideologies and methodologies vary significantly from the Brotherhood of Steel, the NCR are one of the nominally “good” Fallout factions. Like the Brotherhood, the NCR have also been in conflict with pretty much everyone over the years – including the Brotherhood themselves, though they have stood together against the Enclave – with the most notable conflict being with Caeser’s Legion.

Chance of appearance in Fallout 4: 20% – Boston is a long way from home for the NCR, but don’t be surprised to see some emissaries, or at least references to the NCR.

Like the Brotherhood and the Enclave, Caesar’s Legion are the Yin to the NCR’s Yang: they’re the bad guys of the Mojave wasteland and control a large swathe of the Western United States, from New Mexico to Utah. Followers of the Apocalypse missionary Edward Sallow, latterly known as Caesar, formed the Legion from a tribal group who took him as their leader when – in exchange for his own safety after being captured – he assisted them in defeating other local warring tribes.

Caeser quickly organised the tribals into his Legion, a brutal slaver faction loosely based on the Roman Empire, and rampaged through the Western States. Caesar’s Legion had assimilated (read: conquered) nearly 90 tribes when, as part of their Westward advances, they locked horns with the New California Republic.

Chance of appearance in Fallout 4: 10% – like the NCR, Boston is a long way for Caesar’s Legion to come, and they’re a far more insular group.

Tribal groups in Fallout – like the Great Kahns or Point Lookout – are barely-organised, semi-feral groups of survivors who have banded together to scratch out an existence in the Wasteland. Often dangerous, they can sometimes be bargained with, if they need your assistance.

Chance of appearance in Fallout 4: 75% – Tribal groups are more prevalent in the Western United States, but we’re still expecting to see some.

Unlike Tribals, who often have a sense of community or duty to one another (and can sometimes be bargained with) raiders are barbaric and vicious groups whoa re out to rape, pillage and murder whatever they can get their hands on. They’re sometimes organised groups – like the Vipers or the Jackals – but are always dangerous and should be avoided.

Chance of appearance in Fallout 4: 100% – it wouldn’t be Fallout without marauding raiders.

The Regulators are a vigilante justice faction spread across the United States, taking it upon themselves – often with the help of the player character, if they have good karma – to bring criminals to justice. If the player has been bad, then they may find the Regulators are out for their head; for a bounty, of course.

Chance of appearance in Fallout 4: 75% – the Regulators are an interesting group, and give the opportunity for bounty quests.

Followers of the Apocalypse

The Followers of the Apocalypse are a pacifistic, philanthropic group living in the Western United States. They operate like a combination of the Red Cross, Doctors Without Borders and – although they are rarely violent – the NATO peace-keeping force. Often found setting up hospitals and schools, and needing help from the player character.

Chance of appearance in Fallout 4: 15% – the Followers of the Apocalypse are primarily based out West, but are known to travel to do their good deeds.

Very little is known about the Chinese in Fallout’s world, but their presence can be felt all over. From the discarded Chinese equipment to the propaganda messages still streaming across the airwaves, the ripples in the water from the actions of Chinese infiltrators on US soil can be felt all over the United States.

Chance of appearance in Fallout 4: 50% – perhaps it’s time we saw the Chinese in action, not just present in spirit?

Fallout 4 is released on November 10; pre-order it from Amazon now.