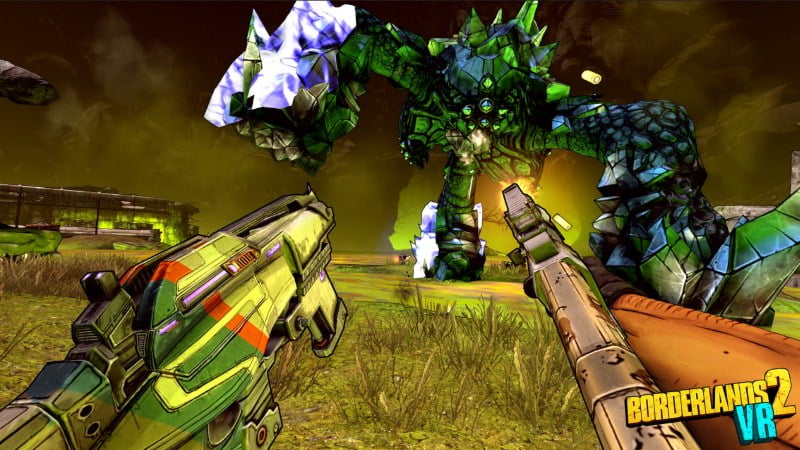 Gearbox is bringing their special brand of claptrap to virtual reality, with Borderlands 2 VR.

Borderlands 2 is one of our favourite things. Virtual reality is less of a favourite.

And there are some great VR games – Adr1ft, Moss, Astro Bot Rescue Mission, Star Trek: Bridge Crew – but it still feels like it’s a bit niche. Like VR is still a bit too expensive and awkward, and doesn’t quite have that one killer app to drive everyone to the platform. Yet.

Have Gearbox addressed the issue, with Borderlands 2 VR?

Not really. There are, as far as we can see, a few fairly significant issues with Borderlands 2 VR.

First up, it’s just available for PSVR. That’s not an issue in and of itself, but if developers and publishers want virtual reality to break down barrier to full adoption, games need to be available on as many platforms as possible. It’s possible Borderlands 2 VR might come to PC at a later date, but there’s no sign of it yet.

Secondly – and this isn’t a criticism of Gearbox here, but VR in games in general – they still haven’t solved the locomotion problem. Borderlands 2 is a fast, slick, riot rush of a game. To have to navigate its world by pointing and clicking on the floor in tiny teleports? It just takes the fluidity away.

And thirdly – and this is by far the most important issue – it’s only single player. Borderlands is just about fine on your own, but it’s only when you play it with a second (or third, or fourth) player that it becomes truly special. And it really is special with others, so to play Borderlands 2 VR all on your lonesome?

We can find out just how miserable when Borderlands 2 VR launches for PSVR on December 14, 2018.