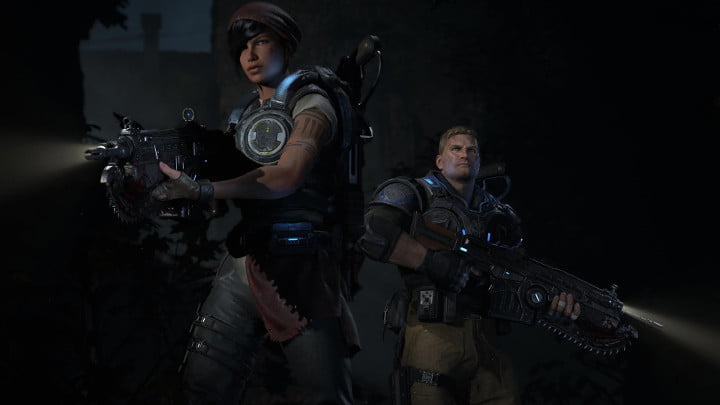 Gears of War is a series at its core about fighting bugs, but the Gears of War 4 webbing bug is a game breaking one that even Marcus can’t kill.

Sometimes there are bugs that stop you progressing in games. Everyone understands that these things happen and yes, they’re a massive pain, but usually there’s some sort of workaround. Take the one from Metal Gear Solid V, where you could avoid it by just not using companion, Quiet, for a couple of specific missions. You can take your pick of any number of Bethesda bugs that could halt a Fallout or Elder Scrolls game in its tracks, like the one with the beds from Fallout 4. Reload your save if you’re stuck, avoid the problem next time around, and progress on with the game. Simple enough.

But sometimes, a bug is truly game breaking, and we’ve just stumbled on one in the Gears of War 4 webbing bug.

Update, January 15, 2016: There’s now a workaround for this game breaking bug. See towards the end of the article for the details.

You’re playing through Gears of War 4‘s otherwise excellent campaign mode, either solo or co-operatively, and you’re just starting out on Chapter 4, Act 1. You’ve already dodged another potentially game breaking bug on the cut-scene between Chapter 3 and Chapter 4 – which seems to happen to PC players exclusively, when using two graphics cards in SLI/Crossfire configuration – and are fighting your way through hordes of enemies to the next scripted sequence. We’ve experienced this bug on console, the Xbox One S specifically, but it may occur on other platforms.

Wanting to avoid spoilers, let’s just say our motley band of heroes are stuck down a very deep hole and they’re in a spot of bother. They stand on the end of some cables and shoot them free, allowing a counterweight to pull them in the opposite direction; a familiar motif that we see throughout the game. Then, because things were going too well, the counterweight gets caught up in some monster snot ‘webbing’ strung up across the shaft. The game drops you out of a cutscene and you find yourself suspended along with the counterweight, and the game tasks you with shooting it free of the webbing.

The Webbing Bug in Action

In theory, you shoot four bunches of webbing from around the counterweight, and the world’s most unsafe elevator can continue on its merry way.

But for some people – us included – there aren’t four bunches of webbing impeding the counterweight, there are only three: the one in the bottom right doesn’t appear to be there. You’ll shoot all the webbing you can see, but nothing happens. You’ll then spend a bit of time swinging back and forth on your cable, swatting away tumbling enemies, trying to see if there’s a bit of webbing you missed.

Frustrated, you’ll start unloading your pistol into the non-destructible gunk and goop stuck to the front of the counterweight. Your comrades, the game’s logic thinking you haven’t grasped the task, start offering helpful hints as to how to proceed. “Just shoot the webbing to release the counterweight!” Thanks, guys. You might find, as you fire into thin air like Keanu Reeves in Point Break, that you hear the twang of webbing being broken, with great gobs of the stuff spattering forth onto the screen by way of encouragement. Gears of War 4 may be from a new developer, but it’s still a Gears game; subtlety isn’t front and centre when it comes to visual effects.

This feels like it might be the start of a workaround, so you fire frantically into the empty space where the webbing should be. Invisible webbing strands ping and pop, but nothing happens. You just hang there, flaccid, like a bauble on the world’s goriest Christmas tree.

Is There a Workaround for the Gears of War 4 Webbing Bug?

As far as we know, there isn’t one. Here’s a list of the things we’ve tried:

The only thing we’ve not yet tried is completely uninstalling and reinstalling the game, yet, because Gears of War 4 is enormous and takes an absolute age. We’ve also not tried restarting the whole game from the beginning, because that seems to be no more likely to work than restarting the chapter. Additionally, you can’t just use the chapter skip function because – if this is your first campaign play through – you haven’t discovered the later chapters and acts in order to jump to them.

There’s been a suggestion that getting invited to play Chapter 4, Act 2 in a co-operative game (hosted by another player who has successfully passed the bugged-out area on Chapter 4, Act 1) might allow you to skip past it, but we’ve not been able to confirm this.

Update, January 15, 2016: Yes, there is now a workaround! Keep reading to the end for the details.

Sadly, no. We’re all out of ideas on the Gears of War 4 webbing bug.

We’ve seen two other incidences of this game breaking bug reported online to this point. The first, reported by user McBeth2222 on the Gears of War 4 support forums, has been lumped in with a general ‘bug report’ thread and has apparently never been addressed. The second, a short video on Twitter by user Seiseki Travis, sums it up pretty succinctly:

We’ve contacted The Coalition to see if they have any advice, or if a fix for this bug is expected. We’ll let you know if they have any suggestions, but for now we’re stuck, and we’re pretty sure there must be other players out there experiencing the same issue.

Thanks to Jonathan’s suggestion down there in the comments section, there’s now a workaround for the game breaking Gears of War 4 webbing bug. We’ve tested it and it works and – other than having to backtrack around ten minutes of play – it’s actually surprisingly simple.

Here’s how you do it:

Why does this moment of inactivity resolve the issue?

It’s simple, really: when you’re flying up the elevator shaft and – as you’re supposed to – firing up the shaft to clear out the falling debris, some of the debris that’s falling is of the explosive barrel variety. And one of those barrels ultimately comes to be stuck in the webbing we’re all having issues with (visible in the screenshot above).

And unfortunately you have to restart the chapter because the last autosave is just as the webbing bug hits, but by that time, you’ve already taken out the barrel and broken the scene.

Still, at least it’s only about ten minutes of backtracking to get your campaign progress back on track. We tested it and it works, so if you’re stuck with the Gears of War 4 webbing bug, give it a go. And don’t forget to thank Jonathan.

Shop Gears of War 4 on Amazon.