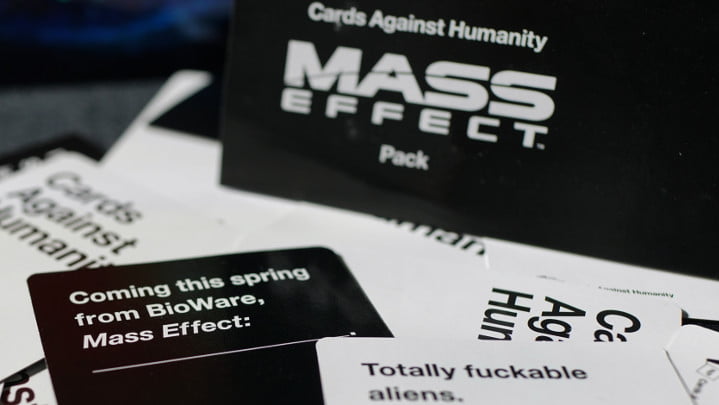 The folks at Cards Against Humanity quite like the Mass Effect series. By happy coincidence, the writers at BioWare also quite like the original, hyper-offensive card game. What happens when you put those two things together?

Seven hundred… is what they started with. Ultimately they had to whittle that down to just 14 cards, presumably because there’s only so much alien boning even Cards Against Humanity’s most gleefully depraved players can take.

“Whenever we’d look at the list of cards their team preferred, it was only cards about fucking. We had to push through a few non-sex cards just to widen the appeal of the deck. It was an incredible problem to have and I am still absolutely tickled by this.” – Trin Garritano, director of events, emotions and various promotions at Cards Against Humanity, speaking to Polygon.

Those 14 Mass Effect Cards Against Humanity cards are also set to be quite the limited edition. They only cost a dollar – and you can order them right now from this dedicated site, totallyfuckablealiens.com – but when they’re out of print, they’re out of print. There will be no re-runs, no do-overs, and absolutely no re-writing the fucking ending because the fans lost their shit over the original one. Just saying.

Even the microsite features Cards Against Humanity’s signature humour. They’ve setup a dedicated email address – entitledwhining@cardsagainsthumanity.com – for those still bitching about the aforementioned original ending to Mass Effect 3, and there’s even a caveat that the other 686 cards will probably be delivered later as DLC.