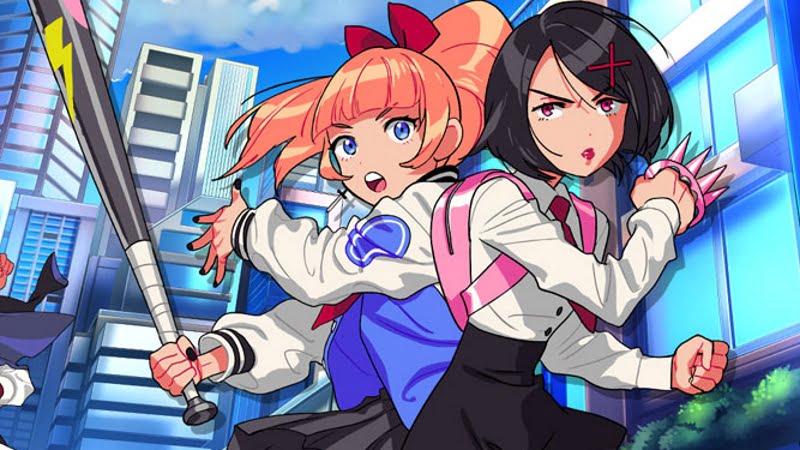 This one’s come out of nowhere: Introducing River City Girls, from WayForward and Arc System Works.

Indie developer WayForward may be best known for the Shantae series. On the list of games on its website, Shantae takes up 22% of the roster; that’s nine games out of a total of 41.

But as you glance down that list, it might surprise you to see some other well-known franchises and properties that WayForward has done development duties on. Adventure Time. Regular Show. Goosebumps. Duck Tales. The Smurfs. Aliens. Marvel’s Thor. The Mummy. Bloodrayne. Silent Hill.

Now WayForward can add another popular franchise to its list: River City Ransom.

But because this is WayForward, who aren’t shy about colourful visuals and female protagonists, the old format has been flipped on its head. River City Ransom has become River City Girls.

Instead of Alex and Ryan fighting their way through stages full of mooks to rescue a damsel in distress, in River City Girls, Misako and Kyoko are going to war to rescue two kidnapped guys. (Who, as it goes, carry more than a passing resemblance to Alex and Ryan from the original River City Ransom. It might even be them. It’s a nice touch, either way.)

The gloves are off! We're excited to finally share the details on our upcoming co-op beat-'em-up, River City Girls, which hits Switch, PS4, Xbox One, and PC this September! You can play it at @ArcSystemWorksU's @AnimeExpo booth this week! https://t.co/tD6ARMXDsO pic.twitter.com/peyy4mjB84

Beyond that, it looks like a classic side-scrolling fighting game, resplendent in WayForward style.