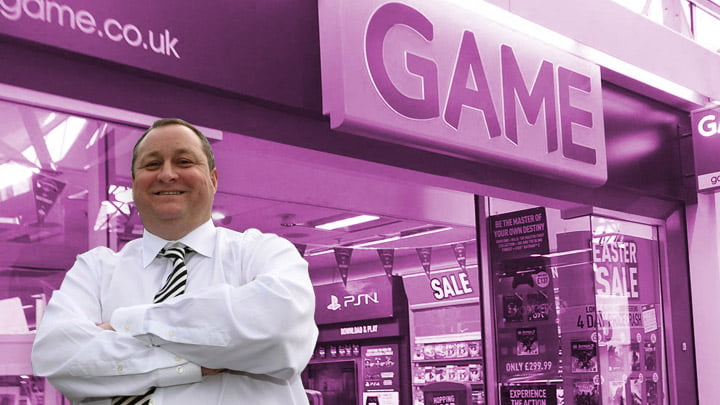 Mike Ashley’s Sports Direct has bought a 26% stake in Game Digital, the struggling UK video game retailer. What does it mean?

This week, it was announced that Sports Direct has bought a 25.75% stake in Game Digital. The implications of that move may not be immediately obvious, but here are three things we know about Mike Ashley, the billionaire UK businessman and founder of discount sporting goods retail empire, Sports Direct:

Sorry, that should read: Mike Ashley loves having his fingers in lots of pies, as in, he likes to be involved in lots of different businesses. (He then presumably eats a lot of pies to celebrate.)

But in all seriousness, Mike Ashley is into pretty much everything. Here’s a list of all his business dealings that we know of, starting with the ones you’re probably most familiar with:

Holy shit that’s a lot of businesses, and those are only the ones we’re aware of that pertain to his UK retail operations. Ashley and his holdings groups – Mash, after a portmanteau of his first initial and last name – also own large amounts of property and hold investments in a number of global businesses.

You might not be aware that Ashley’s modus operandi is to either purchase a stake in a business he is competing with – “he likes to park his tanks on peoples’ lawns,” according to a quote from an unnamed banker in the Telegraph – or purchase a business that is on the verge of folding, and roll it up into his general Sports Direct empire. Pretty much all of those ‘taken over’ businesses in the list above were either bust, or were millimetres from it, allowing Ashley to pick them up at a rock bottom price.

That’s why the likes of Dunlop, Slazenger and Karrimor can now only be found for sale at Sports Direct. It’s also why the sporting equipment produced by these manufacturers is a shadow of what it once was. It would appear on the face of it, from a purchaser’s perspective at least, that very little money goes into R&D at these acquisitions, and Sports Direct are often peddling technology from several years ago with a new coat of paint.

(I’ve tried Dunlop’s golf equipment since the Sports Direct acquisition and it is abject, worthless crap. But it’s cheap crap, sold in a cheap shop, so people will keep buying it – you get what you pay for.)

What’s apparent, from many of those acquisitions, stake purchases and takeovers, is that Mike Ashley likes to buy things when they’re cheap. It’s an ethos that’s served him and his customers well in the Sports Direct retail environment – everybody loves a bargain, after all – so who can blame him for sticking to that simple mantra?

Often, though, the business is on the point of collapse when Ashley swoops in with a takeover, as is the case with many of the sporting goods manufacturers listed above that now only work to serve Sports Direct.

Acquiring stakes in businesses like Tesco, Debenhams and House of Fraser has also taken place while those businesses have been suffering and their stock was low, but not so low as to allow Sports Direct a full buy-out.

So the primary MO, then, of taking a failing business and recreating it in his own image won’t work with a retailer like Game Digital. Game isn’t a manufacturer; there’s nothing that business produces directly, so don’t expect to see video games being punted in Sports Direct at a discount price any time soon.

More likely, Ashley is hedging his bets. If he buys a stake in a business like Game while its stock is low, and it ultimately goes up, then he’s won. He makes money, Game carries on, and everything is rosy in the garden.

If the business continues to fail however, he’s then in an excellent position for a further stock acquisition and ultimately a takeover bid – like with the French Connection acquisition earlier in the year – and then he ultimately can rebuild the store in his own image (complete with zero hours contracts and giant, monolithic mugs, probably).

While the man himself has been testifying at a court hearing – in which Ashley allegedly promised to pay a lawyer £15m if Sports Direct shares doubled, which they did, but no payment has been made – an interesting picture has been painted of Mike Ashley’s business habits.

On one occasion, he drank 12 pints with vodka chasers, then threw up into a pub fireplace at a business meeting. That was part of a drinking competition which evidently, he won, but is quite remarkable in a business setting. He’s also been known to “sleep underneath the tables in the middle of meetings he found boring,” according to evidence given at the same hearing.

And what does this have to do with the Game Digital stake acquisition in particular? Nothing for definite, really, but I’m secretly hoping that he made the 26% purchase of the UK’s last remaining major retail gaming outlet after one of his now-legendary laddish drinking meetings.

Because the alternative to a drunken escapade?

The alternative is that he’s following the standard Sports Direct acquisition model, which could be a very ominous sign indeed for Game’s fortunes that the vultures are circling.