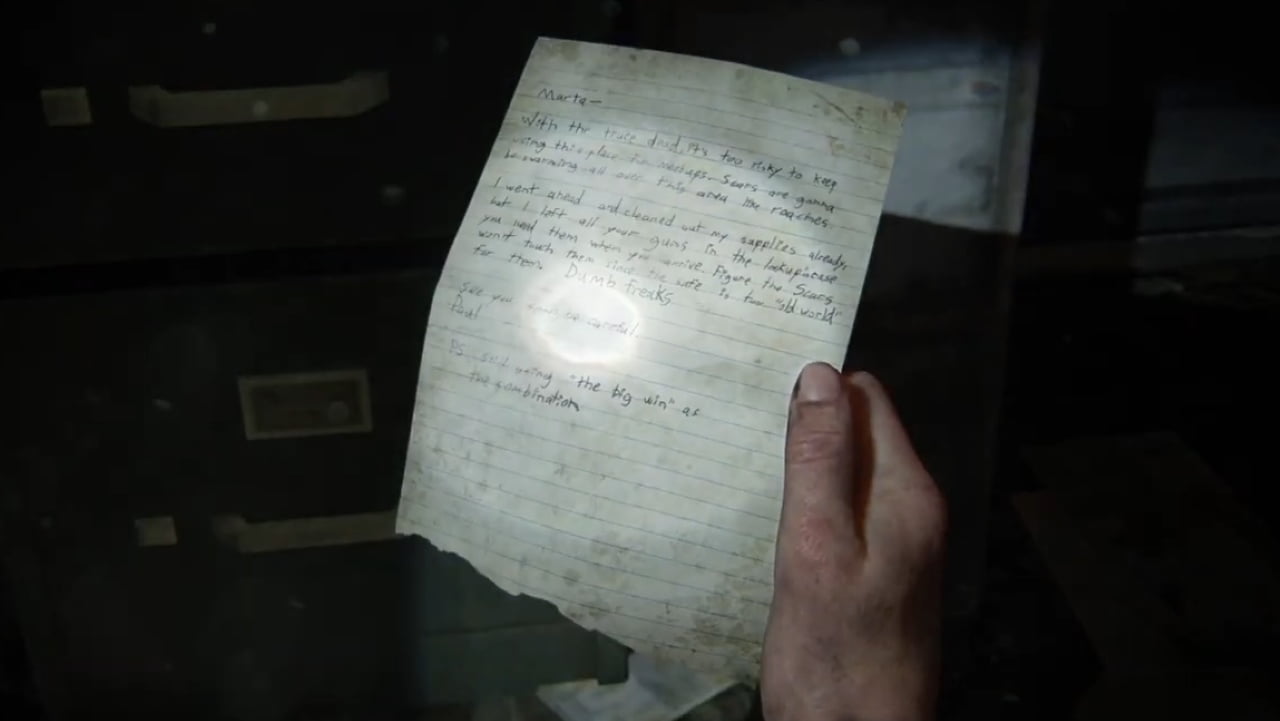 One of the safe codes in The Last of Us Part II is more difficult to solve than the others. What is “the big win”, then?

The Last of Us Part II does something interesting with its codes for doors, gates and safes. Where most games would have you simply learn the code, then once that’s ticked off in your quest log, will handle the mechanics of entering the code automatically. In Part II, you need to not only learn the codes but remember and enter them manually.

Sometimes, that’ll mean codes written down on a sheet of paper. You’ll find that in your inventory of collectables to refer back to. Other times, the code won’t be revealed directly in a note or letter, so much as hinted at.

Most of the time, that’s pretty obvious: “The code for this safe is the same as the code for the East Gate,” or something of that ilk. Or perhaps it will point you to something in the environment; one such instance has the code written on a drywipe board not 20 feet from the safe it opens. (Information security and environmental storytelling have forever been at odds, haven’t they?)

But there’s one safe code in The Last of Us Part II that’s a bit more cryptic, a bit less obvious:

PS. Still using “the big win” as the combination.

We racked our brains over this one for a while. Maybe it’s a date of something, a big victory for a sports team, perhaps? Given that this safe is found in Seattle, and the Seattle Seahawks have won the Super Bowl once, we wondered if that might be it? But the Seahawks won their only pennant on February 2, 2014 – 02/02/14 – which is after Cordyceps Brian Infection “outbreak day” on September 26, 2013. The world already ended just before the Seahawks won the Super Bowl. That’s sad.

Could it be some sort of puzzle or substitution, then? We thought about the position of the first letters of the three words in the alphabet – T = 20, B = 02, W = 23 – which didn’t work, either. There didn’t seem to be any obvious solutions.

So we went back to the building where we found the note to search for more clues and spotted the answer almost instantly. On the corkboard, near to where the note is found, is a lottery ticket. And on that lottery ticket, ringed in red, are three numbers. “The big win” refers to a winning lottery ticket that they’ve pinned up on the board for posterity.

It’s quite a small clue, so you can be forgiven for missing it. You’ll also need to squint a bit to see it, especially if you’re not put a scope on your rifle yet. So if you’re still struggling, “the big win” code in The Last of Us Part II is 17-38-07.

Inside “the big win” safe you’ll find a hunting pistol – a powerful, single-shot beast that can be upgraded with a scope – and a bunch of ammo. It’s worth busting that one open.

Forgotten what happened in the original The Last of Us? You’ll want to read our comprehensive story recap.