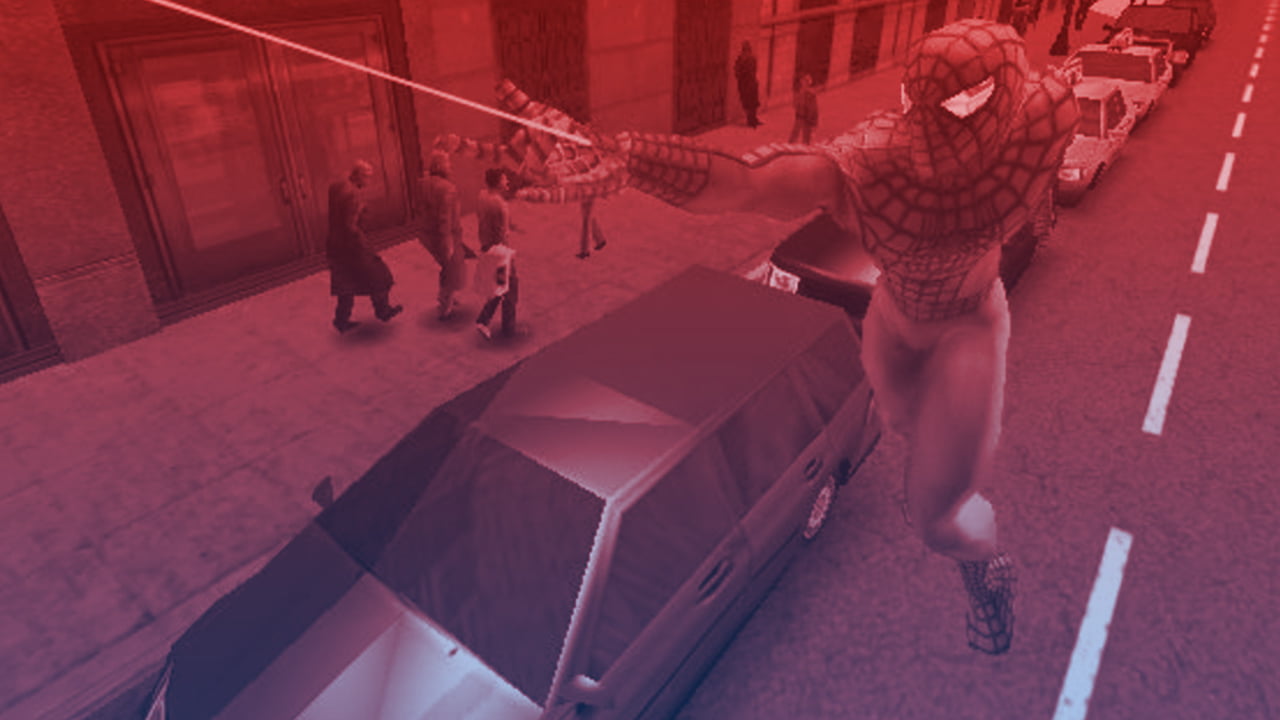 Until Insomniac’s Spider-Man was released on PlayStation 4 last year, Treyarch’s 2004 adaptation of Spider-Man 2 was the high watermark for the famous Marvel superhero.

At his GDC 2019 talk, Swinging with Spider-Man, designer and technical director, Jamie Fristrom, spoke about the creation of Spider-Man 2’s influential traversal mechanics.

“It didn’t feel like Spider-Man to me,” Fristrom says. “So I would come in late at night, and try to make my own ideas, and my own prototypes, and eventually they took on a life of their own. When Spider-Man 2 rolled around we were able to keep iterating on those, and we ended up with what is now considered a classic game.”

The key to redefining Spider-Man’s movement was to focus on ‘intrinsic motivation’, the joy of doing something just for the thrill and feel of it. Player insights – and a small amount of luck – played a part, but the key was to completely exclude extrinsic motivation from the design process.

“It’s tempting to start adding score systems, your achievements, and levelling up into early prototypes,” says Fristrom. “But don’t, because a) it corrupts your data – you don’t know if players are coming back and just playing longer to get those points, or if they are doing it because the core is a fun activity – and b) the extrinsic motivation can actually damage the intrinsic motivation.”

Fristrom attempted to work out what makes one swinging mechanic more intrinsically pleasurable than another. Originally, the objective was to aim for realism, but this wasn’t the right path to take.

It turned out that there were a range of physical impossibilities that players were happy to accept, as long as it made the game feel right.

“Gravity in Spider-Man 2 is about 10 times Earth normal. That’s the only way we could make the speed of the game have that exciting dynamic feel,” Fristrom explains.

Spider-Man can also jump five storeys, and steer in mid-air. It’s something impossible to do in the real world, but with these changes, the game began to feel right. The intention was to have the player experience – as defined by psychologist Mihaly Csikszentmihalyi – a flow state.

“We decided to do something that had never been done before,” Fristrom says. “The advantage of doing something like this is that we gave reviewers something to love.”

In making the first prototype, Fristrom explored how other games were handling similar mechanics. Titles like Jak and Daxter, Metroid Prime, and the Quake grappling hook mod, all provided insights on how different approaches and techniques could be used.

“We didn’t want the webs to be attached to the sky. I wanted them to be attached to points in the world, and I wanted to basically be a bob on a pendulum,” says Fristrom. “We were asking players in a simulated 3D environment – and given a certain trajectory – to pick a point in the world, and attach a rope to it that will give them the direction and speed to end up where they wanted to be.”

The first attempt at designing the system was based around the placement of anchor points in the world, starting with the corners of every building in the game’s recreation of Manhattan.

“The prototype wasn’t there yet,” says Fristrom, “but it was good enough with a few modifications to get to the point where we said ‘let’s keep investigating this.’”

The more anchor points that were added to the levels, the less confused players were. Eventually, the system evolved to include all surfaces.

“We sent out rays like feelers, and where they intersect a surface, that’s the point to swing from,” says Fristrom.

It was an elegant solution that created the feel and flow state required. And with a little fine tuning of everything from air resistance and jump height to the tone of wind sound effects, the movement mechanics came together.

However, even though it was working well, some playtesters were frustrated. So much so, they would sometimes run to an objective at street level, rather than swing. The key to changing this was the addition of voice-overs from legendary actor (and the game’s narrator) Bruce Campbell. His slightly mocking tone provided players with the encouragement they required.

“We found that you could make fun of your players,” recalls Fristrom. “Bruce Campbell would give them crap, and they would say ‘He’s on to me!’ and would start swinging again.”

The team also want to provide an extra challenge for more experienced players. That’s why Spider-Man 2 includes power-ups – such as higher and longer jumps – which were designed for players who had become more comfortable with the mechanics.

“This gave us benefits in terms of being able to ramp the players up slowly into the difficulty curve, acclimatising them like lobsters,” says Fristrom. “We were now adding extrinsic motivators, and it’s kind of cool. We were far enough along with the project to feel safe about adding these things.”

Another aspect that helped with the fluidity of movement was making sure that Spider-Man didn’t stick to walls, as he did in the first game.

“Turning that off was one of the biggest things that turned that initial prototype into a game that we could continue exploring,” Fristrom says. And to maintain the illusion, a range of small animations were added for when Spider-Man was close to another surface.

“The way we dealt with it was to play cool looking animations when you didn’t hit a wall. Little surfer moves, your hands touching the wall, or your feet running along the wall for a little bit.”

The game was a huge critical and commercial success, finding fans in those who embraced becoming a friendly neighbourhood Spider-Man, as well as those who just enjoyed the intrinsic motivation of traversal.

“A lot of people came up to me after Spider-Man 2 and said, ‘I have trouble controlling it’. I’ll swing, and I’ll go somewhere, and it won’t be where I intended to go, but I won’t care. I’m having fun.”

If you’re interested in Fristrom’s approach to environmental locomotion, you can download the full Unity project of his PlayStation 4 and PC game, Energy Hook, from www.energyhookgame.com.