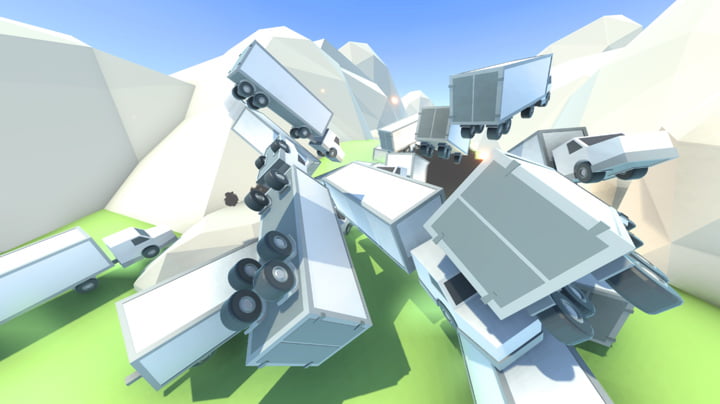 A physics based platformer in which you jump from truck to truck doesn’t sound too interesting on paper, but Landfall’s ClusterTruck takes that flimsy premise and literally runs with it.

Sporting clean, vibrant graphics the game nips along at some pace as you negotiate lasers, obstacles, pile-ups and what look to be suicidal lemming trucks. Jumps and manoeuvres rack up points and hitting the floor results in an instant demise. The game features over 80 levels plus a full level editor and Steam Workshop support.

ClusterTruck‘s new gameplay trailer shows off its speed and craziness beautifully, and the result looks to a be a fun but hard as nails ‘in the zone’ experience.

The game will also get an official launch at TwitchCon in San Diego at the end of the month where publisher Tinybuild Games will be parking a GIANT TRUCK in the middle of the show-floor.

ClusterTruck will be released on for Microsoft Windows, OS X, and Linux on 27 September, 2016. Pre-orders for the game are now live with a 20% discount on the final release price and a special pre-purchase bonus will be revealed next week.