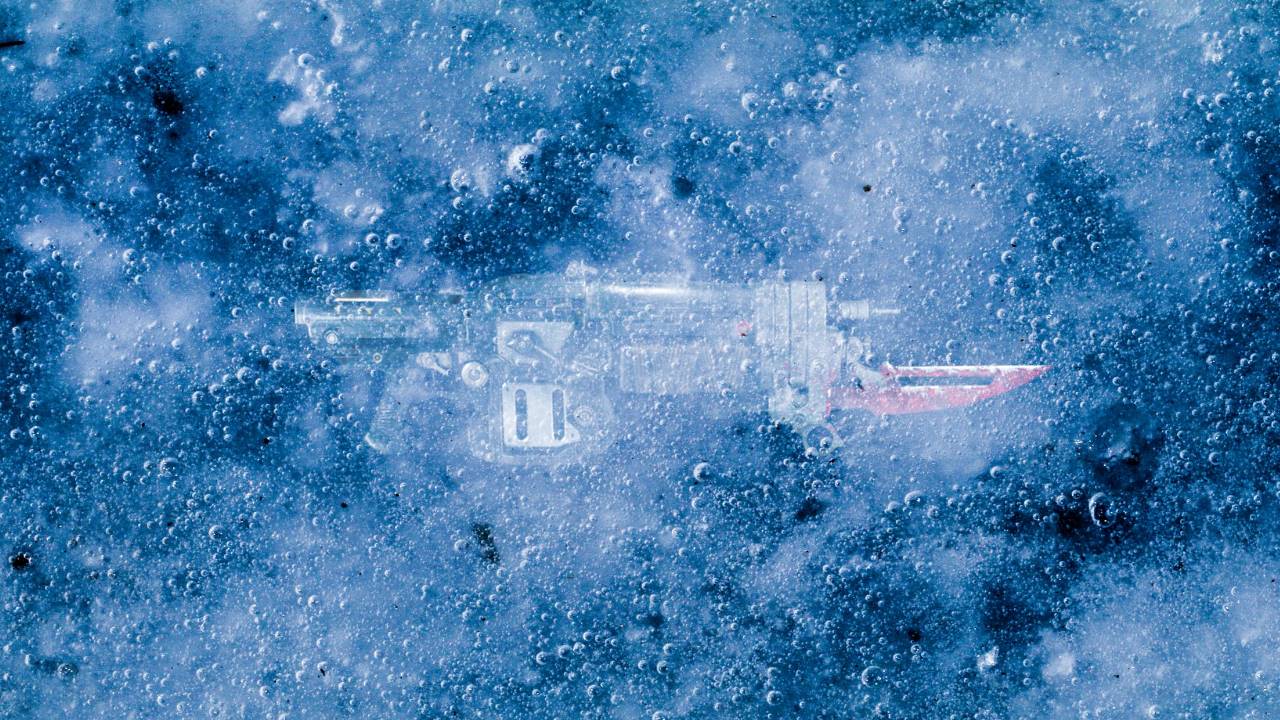 The matriarch is one of the toughest bosses in Gears 5. Here’s how you put her down.

The second chapter of Gears 5 – don’t worry, there won’t be any spoilers – sees our heroes exploring a semi-open world environment, like the jeep in Uncharted 4, or the boat in God of War. They’re looking for a specific location by searching for radio signals, but there are also a bunch of other optional objectives to explore.

When you find the main objective, the game warns you that you won’t be able to proceed, then you’re funnelled into a more traditional Gears of War locale. In short, the open area is switched for an enclosed one, full of corridors and waist-high walls.

At the end of that sequence, which also features a lot of exposition, you’ll have to fight your way out. (It may be a thoroughly modern Gears game, but it’s still a Gears game.)

The majority of the enemies are standard swarm drones, combined with some of the frightening, Predator-like sires we’ve seen before in Gears of War 2. To do this, you’ll have some of the retro COG equipment, including the first-generation Lancer (with a traditional bayonet and no chainsaw attachment), the gnasher shotgun, and a metal pipe. Yes, a pipe. You’ll also be treated to a new heavy weapon, the cryo cannon. This is especially handy for freezing the speedy sires and slowing their approach.

Then comes the matriarch. She’s a big beast, somewhere in the region of 3-4 metres tall, and probably weight as much as half a tonne. She’s an analogue of the berserker from earlier games. Like the berserker, the matriarch is blind, so she locates enemies by sound or smell. And when she finds you? She charges and attempts to pummel you to death. Which she does, with so many one-hit kills.

You’re going to have to kill the matriarch if you want to complete chapter 2 and progress the story in Gears 5. Here’s how you do it.

When you first run into the matriarch in Gears 5, she’s introduced of being vulnerable to cold. Then when she bursts through the wall into a confined atrium for the final confrontation, she steps onto an icy pond, falls through the surface, and freezes solid. Temporarily, at least. That’s clue number one.

She’s also heavily armoured, covered from head to toe in solid spikes and spines. A head-on attack will do no good here. But you get your second clue when she turns around – she has one of those glowing red blisters in the middle of her back.

In the first phase, that’s all you really need to know. Stand across the opposite side of an icy pond – there are three in the arena – then when the matriarch charges, shoot the ice beneath her feet to plunge her into the frigid waters. She’ll freeze solid for 5-10 seconds, so hotfoot it behind her and unload everything you’ve got onto that glowing red weak spot.

When she unfreezes, she’ll charge, so get ready to dive out of the way, then position yourself on the opposite side of a pond again. If you’ve been quiet, she’ll be disoriented and unable to locate you. You can take an opportunity to ping her once on the weak spot with a high-powered weapon – like a oneshot or boltok if you have one – to deal a little extra damage. But really, this is to encourage the matriarch to run back over the pond again, so be ready to shoot that ice.

Once you’ve dealt enough damage, and chiselled her health down by about a third, she’ll disappear into the distance and exercise some telepathic powers to interfere with Kait’s vision. The tactic remains the same – wait for the matriarch to approach, shoot the ice – but your visibility is significantly reduced. It’s here that playing co-op with a human Del really comes in handy.

Drop her back in the ice, hit her again, then you’re onto the second phase.

During the second phase, the matriarch will have picked up a couple of new tricks. The first is a piercing scream, which can temporarily phase and incapacitate players. The second is a ranged attack, where she rips one of the spikes from her back and throws it at one of our heroes.

For the most part, you’ll be repeating the ice pond/shoot the weak spot strategy from the first phase. But when you hear a loud crack – of the matriarch pulling a spike from her back – get ready to dodge. The thrown projectiles home in a little bit, which doesn’t seem very fair, and immediately knock down the target. You’ll have to remove the spike by mashing the ‘B’ button, before either the spike kills you, or the matriarch flattens you while you can’t move away.

Lather, rinse and repeat, until you’ve knocked another third off the Matriarch’s health, and she’ll wield those telepathic powers again. Be patient, ping the ice when she gets close, then you’re onto the third phase.

In the third phase, the matriarch mixes things up a bit, and changes the patterns we’ve grown familiar with. (A bit unfairly, we might argue.)

For starters, that single thrown projectile has turned into a fan of spikes that fire in every direction. That means she can hit any and all of the players on the field at once.

What’s more concerning, however, is that consistent, direct running approach has been swapped for a jumping aerial attack. This means you can’t rely on dropping her into the ice so easily, just by positioning a pond directly between you and her current position. One of the best techniques we found was to stand yourself in the middle of a pond, then let the thrown projectile hit you. When you hammer ‘B’ to remove the projectile, she’ll set for an aerial attack, as she can hear you struggling with the spike. That should give you just enough time to remove the spike and roll out of the way; then she should be standing on some fragile ice and you can drop her in as normal.

When the matriarch is whittled down to low health, then she’ll use that telepathic power to impact Kait’s vision again. This time, it’ll stay that way until the end of the fight. Again, this is a scenario where it’s incredibly useful to have a human playing as Del. When you’ve dealt enough damage in this final phase, the matriarch will be down, and you’re free to progress the story.

Summer Game Fest Kickoff Live was hardly a blockbuster opening to the 2021 virtual expo season, but a few titles...