Welcome to the party, pal – John Rambo and John McClane join Call of Duty as new Operators, for some reason.

Keeping up with the 80s revamp Warzone recently went through, at the hands of a nuclear bomb no less, the battle royale has received a visit from some 80s cinema royalty. A mid-season update introduces both John McClane and John Rambo as the latest additions to its roster of Operators.

The uncanny valley has arrived with the likeness of action stars Bruce Willis and Sylvester Stallone making their way into the game as their respective Die Hard and Rambo series characters. These operators arrive as part of the 80s Action Heroes event, which brings with it new side missions, locations, bundles, and weapons. The event will see new content added across Warzone, Cold War and Call of Duty Mobile, all of which are available now.

(Interestingly, the Activision press materials are plastered with images of Rambo, but John McClane is nowhere to be seen? While 20th Century Fox owns the rights to the character, presumably Willis has some veto powers over his likeness being used for guff like Call of Duty or Fortnite.) 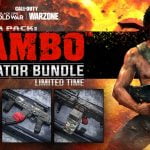 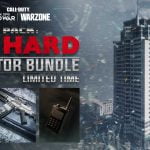 Another big addition during this 80s extravaganza is Nakatomi Plaza, which players will be able to explore as it makes its way to Verdansk as a limited time point of interest. The infamous building was the primary setting of the ’89 classic Die Hard. Players can find the building in the Downtown area replacing the sniper haven Broadcast Tower. On the new location, Activision stated:

“This is the tallest single structure seen in Warzone and includes five floors of a space that will be familiar to those who know and love the original Die Hard.”

A homage to Rambo: First Blood Part II, will also arrive in Verdansk in the form of a Survival Camp and CIA Outpost.

While Rambo and McClane are the obvious selling points of this latest update, a massive surge of new content has made its way to Call of Duty, New modes, weapons, and changes across both Multiplayer and Zombies are also arriving, making Cold War/Warzone’s latest season fell like the biggest yet.

Rambo and McClane, along with the 80s event are available now and will remain until the closure of the event on June 18, 2021.