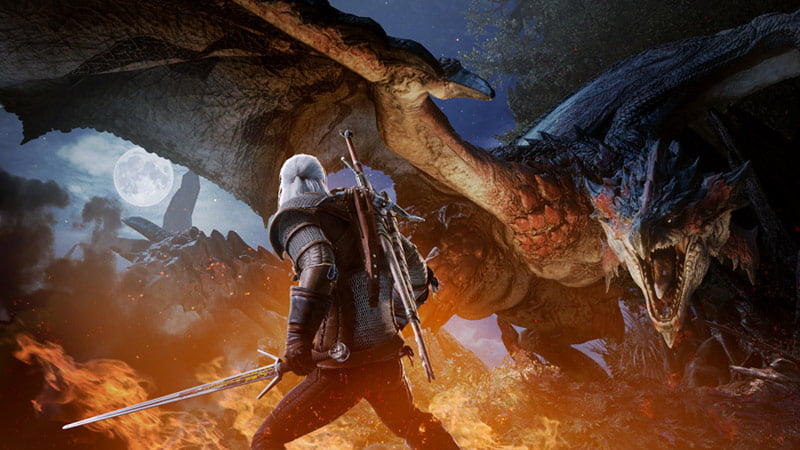 Capcom has outlined a new story expansion for Monster: Hunter World, and an upcoming The Witcher 3 collaboration.

Capcom has announced that Iceborne – a big new content expansion for Monster Hunter: World – will be released in autumn 2019. In addition, Capcom is also working with CD Projekt Red to bring the character of Geralt, from The Witcher 3: Wild Hunt, to the game in early 2019.

Iceborne will initially be available for the PlayStation 4 and Xbox One versions of the game. The expansion – which will continue the story from end of Monster Hunter: World – will include new quest ranks, monsters, regions, moves, and gear. Capcom say that details of the PC release will be confirmed at a later date.

The CD Projekt Red collaboration promises a brand-new type of gameplay experience that blends the mechanics of both games. It will also include new dialogue from the cast of The Witcher 3.

Before then, a new special event quest – the Kulve Taroth Siege – will come to the game on December 20, 2018. The quest will allow up to 16 players to team up in groups of four to tackle a tougher, Arch Tempered version of the monster. In January 2019, the first anniversary of the game will be marked with The Appreciation Fest . Content includes a re-decorated Gathering Hub, special equipment, and some new quests.

A free trial of Monster Hunter: World will also be available from December 12-17, 2018 on PlayStation 4 and Xbox One. It will include single-player quests up to 3-star level, and online multiplayer quests up to Hunter Rank 4. All progress can be transferred over to the full game, which is discounted for a limited time on the PlayStation and Xbox digital game stores.

Bookmark our new releases section for weekly updates on the new games coming to the Nintendo Switch, PlayStation 4, and Xbox One.