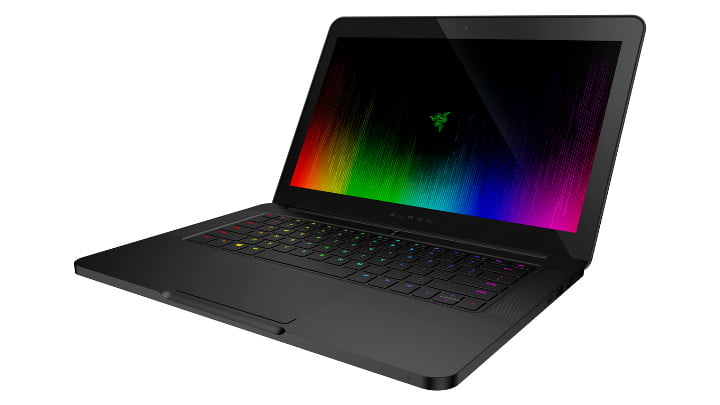 Sometimes it’s really hard to improve on something. Sure, they could try and cram in a couple of GTX 1080s in SLI or triple-screens for some reason, but then you end up with unwieldy, impractical beasts. The Razer Blade is svelte. It’s light. And, other than a silly green snake effect that looks like the flag of the Isle of Man, it’s pretty tasteful as gaming hardware goes.

So any improvements they do make are usually fairly incremental. It’s like the mid-cycle facelift of a car – as opposed to a completely new model – and often, it’s entirely dependent on what others are up-to.

Around the end of last year, the first major change to the 2016 version of the Razer Blade came in the form of an Nvidia GTX 1060 GPU, Nvidia’s all-singing, all-dancing Pascal chipset, that outperforms the previous gen but uses much less power. That was an upgrade worthy of the name.

This time, the headline upgrade is a little smaller in scope: Razer Blade Kaby Lake models are on sale now.

What’s Kaby Lake? That’s Intel’s silly nomenclature for their seventh generation of Core i processors. Kaby Lake succeeds Skylake and will be followed by Coffee Lake – itself another incremental revision, with major upgrade Cannonlake delayed until later in the year – what was I saying again? Oh yes, Intel has stupid names for their processors, and Kaby Lake is a 10-15% incremental improvement over the sixth gen that was previously found in the Razer Blade.

Anything else cool on the Razer Blade Kaby Lake upgrade, then?

There’s a couple of interesting little extras, including a slightly improved memory clock speed and a new 4K capacitative touchscreen option, if you like that sort of thing. The 1080p full HD panel is probably the display sweet-spot when paired with a GTX 1060, though. Trying to drive anything larger than that on ultra settings will impact your frame rates, and the touch option adds 100g to the weight of your super lightweight chassis, not to mention additional cost; why spend the extra money for extra weight and decreased performance?

The Razer Blade Kaby Lake version is available to purchase now from the Razer store in both Europe and the US, along with the actual Razer shop in San Francisco.