Published by Square Enix Collective on PC and via ID@Xbox on Xbox One, The Turing Test follows the story of Ava Turing, an engineer for the International Space Agency, who becomes embroiled in peculiar events at the research station on Jupiter’s moon, Europa.

The game is built is around a power transference mechanic that enables the player to take control of difference machines, manipulate giant structures and solve complex puzzles. On the surface it bears the obvious influences of Portal and the like, but our brief time with the game at E3 suggests The Turing Test has its own identity and is worthy of closer examination on release. 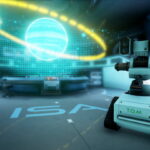 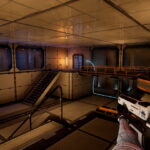 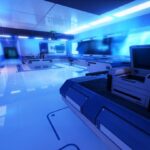 The game is developed by Derby-based Bulkhead Interactive, who previously released Pneuma: Breath of Life. It comes to market with the support of Microsoft’s ID@Xbox program and the Square Enix Collective, the curated platform which enables game creators to post ideas, and for its community to provide feedback and support for the games they like.

“The Turing Test is a remarkable achievement – both visually and narratively – from a team of only six developers. Square Enix Collective is all about championing talented teams and bringing great games to our community – and The Turing Test is a game we can’t wait for people to get their hands on.”

The Turing Test will be released on 30th August on PC and Xbox One. You can find out more about the Square Enix Collective and its current project line-up here.