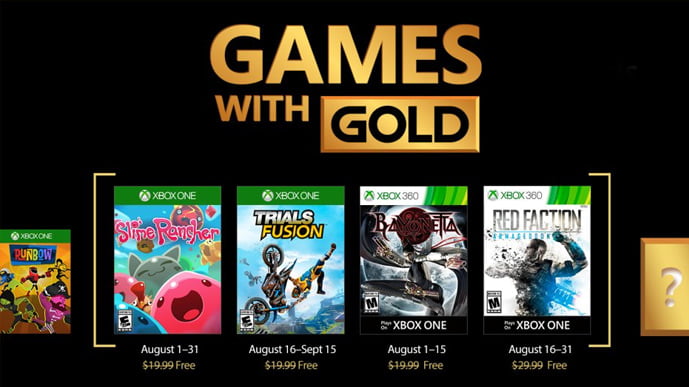 Microsoft has announced the Xbox Live Games With Gold lineup for August 2017.

Microsoft have announced another decent lineup games coming to Games with Gold in August. From August 1st you can pick up the sandbox slime sucking adventure, Slime Rancher on Xbox One. The game has been a big hit in Steam Early Access, and has already sold north of 800,000 copies on PC.

Coming to the 360 on the same day is the original Bayonetta. PlatinumGames’ masterpiece is getting on a bit now – and its story and aesthetics might not be to everyone’s taste – but the game remains, well, a masterpiece.

From August 15th, Xbox Live Gold Subscribers can also get Trials Fusion on Xbox One, and Red Faction: Armageddon on Xbox 360. Both 360 titles are backward compatible and playable on Xbox One.

Xbox 360 (also compatible with Xbox One)

Don’t forget, you can still download two of July’s Games with Gold releases. Ubisoft’s charming Grow Up is available until July 30th, as is LEGO Pirates of the Caribbean: The Video Game.

Bookmark our new releases page for the weekly lowdown on all the games coming to PlayStation, Xbox and Nintendo consoles.