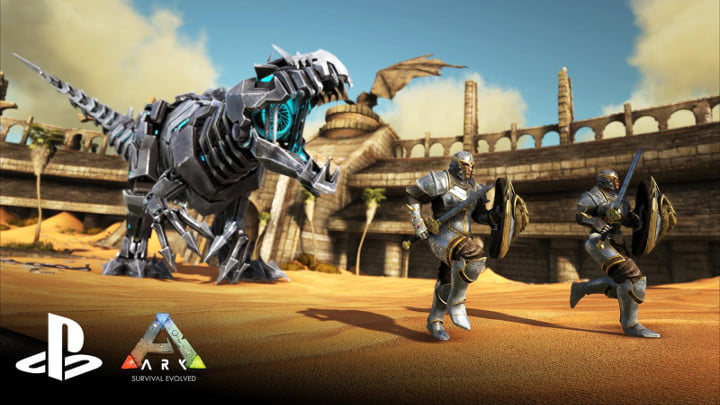 The ARK: Survival Evolved PS4 release will also include the Scorched Earth update, which is jolly nice of them.

Since then, we’ve seen a tonne of new content and, more importantly, new dinosaurs, in addition to a lengthy process of testing, patching, and generally tweaking the product based on the sort of wide-scale testing that only public servers full of real players can provide. There’s even been a major new game mode, Scorched Earth, which most people would consider the game’s first big DLC.

But technically, it’s still not out of Early Access, and the PS4 doesn’t – in name, at least – have a pre-release programme.

Does that mean that with the ARK: Survival Evolved PS4 release signifies the end of the Early Access process, and the transition to the final game is complete? Perhaps. It’s unclear at the moment.

Other games – like the other open-world snowsports game, Snow – have gotten around this restriction by offering players extended beta access in exchange for pre-orders, so there is precedent for the ARK: Survival Evolved PS4 version to continue the Early Access process.

The ‘final’ release has been rumoured to be Q4 2016/Q1 2017, having already been nudged back a few times, but it does seem that we won’t really know that ARK is out of Early Access until the day the Steam store page changes, and the caveat-heavy Early Access notification disappears from the listing.

We’ll just have to wait and see what happens when the ARK: Survival Evolved PS4 version launches on December 6, 2016. There’s also some exclusive cosmetic items for PS4 players, which you can read more about on the ARK website.