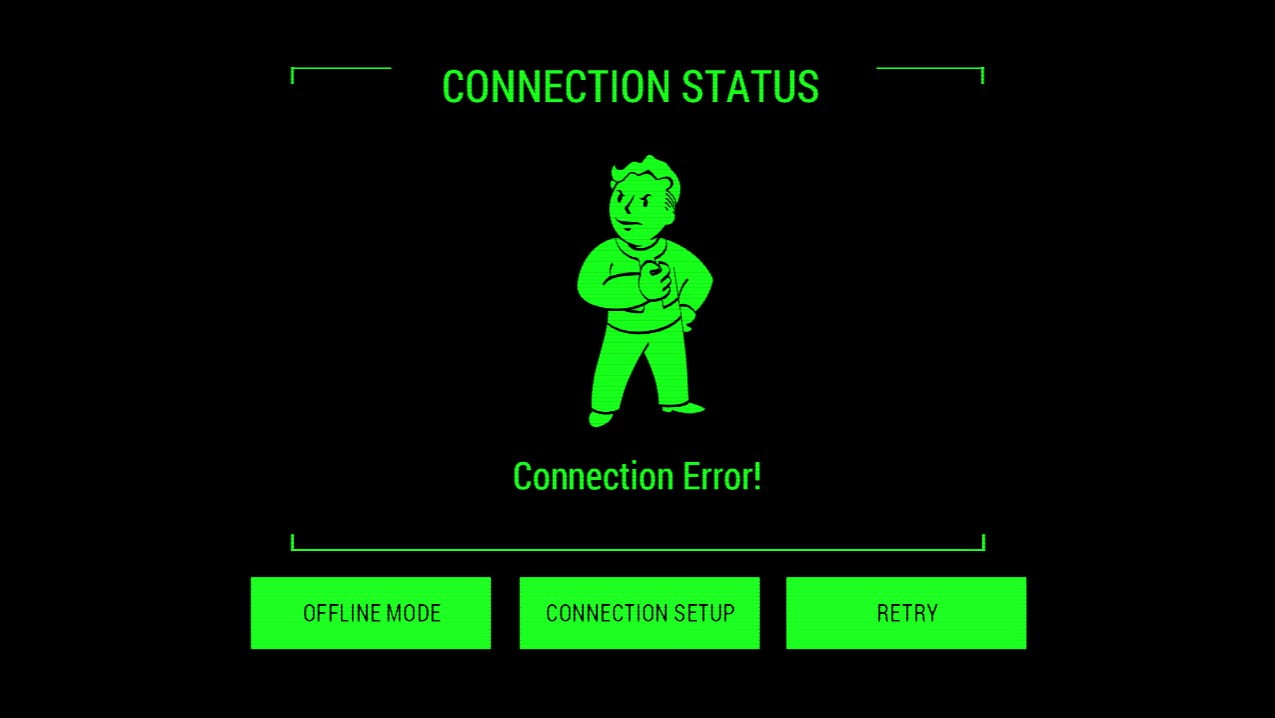 While the Fallout 4 PipBoy Edition is as rare as <insert synonym for extremely rare thing here> you can still enjoy the PipBoy experience without it. If you download the PipBoy app – available for Android and iOS – and hook it up to your Fallout 4 session, you’ll be able to manage your character and inventory on the fly (to a point, more on that later).

But what happens if your PipBoy app can’t connect to your Fallout 4 session? Here are some troubleshooting steps you can try.

1. Enable the PipBoy app in the Fallout 4 menu

It sounds ludicrous, I know, but the ability to connect to the PipBoy app isn’t turned on by default in Fallout 4. From the options menu, select Gameplay, then scroll right down to the bottom: there you’ll find an option to enable the PipBoy app connection.

You’ll then need to quit the game completely – going out to the main menu from your save and then reloading isn’t enough – in order for the changes to take effect. At this point, you’re probably as well rebooting both your gaming device (be it PC or console) and your mobile device or tablet, just to be on the safe side. (Have you tried turning it off and on again?)

2. Check that your devices are all on the network

If you still find that your PipBoy app can’t connect, are you certain that everything is online? You may find that your console is disabling online features because you’re behind on a specific update, or maybe that your mobile device is running on its data service rather than the home wireless connection?

You can check the online status of your devices through their options menus. You could also try dropping the device from the network and reconnecting it, and it would be worth closing and re-opening both the game and the PipBoy app if you have made network changes, to pick up any differences.

3. Check that your devices are all on the same network

This is where it starts getting fiddly. Many modern network devices, like routers and wireless access points, have a much greater degree of functionality than they used to. They may have additional security features that could mean your PipBoy app can’t connect to the system running Fallout 4, or it may be down to the way they’re configured.

Here are a couple of pointers:

Are they on the same wireless network?

Many modern routers have the ability to offer both 2.4GHz and 5GHz-band wireless, known as dual-band wireless or wireless A/C technology. The 2.4GHz and 5GHz bands operate as discrete wireless networks, and will usually be identified by different SSIDs and potentially different passwords. While some devices support inter-SSID communication, others don’t, and this is often difficult/impossible to rectify in your device’s settings; try making sure all devices are on the same SSID, even if it means dropping one device onto the (nominally slower) 2.4GHz band to match up with an older device that does not contain a 5GHz antenna.

Is one device on wireless and the other on wired?

While this shouldn’t cause you an issue in theory, this can exhibit the same symptoms as having two devices on different wireless networks or bands, and mean your PipBoy app can’t connect to your PC or console. Given that your mobile device is almost certainly wireless, try putting your gaming machine onto the same wireless network to see if this resolves the issue.

Do you have any additional security enabled?

We’re not suggesting for a moment you turn off your firewall permanently here, but you could try disabling it momentarily to see if the PipBoy app can connect as a result. If you can connect with the firewall off, then you may need to make an exception in the firewall’s rules table to allow the connection to function correctly. Similarly antivirus software installed on your PC or mobile device could cause these symptoms, as could an isolation setting – to prevent devices on wireless talking to others in the network – configured on your router.

Your PipBoy app is now connected, but it won’t do anything

This is a somewhat different issue to a PipBoy app that can’t connect, and is thankfully much simpler to resolve. The PipBoy app’s functionality will become limited – switching into essentially a view only mode – if you’re performing certain time-altering functions in the game; that is to say, things that slow or pause the in-game clock.

So you may have found your PipBoy app can’t connect, and fixed it with some of the steps above. It may have worked all along, but my cautionary tale remains the same: be careful who you trust your PipBoy app with.

I left mine with my wife, and given that I was in first-person view and couldn’t notice her tinkering with my apparel, she decided to have a little fun. It was only when I found myself striding into battle wearing a sparkly red evening gown that I realised why she had been giggling.

You have been warned!

Fallout 4 is out now! Order it from Amazon.

Blasphemous is getting a deluxe release on Switch, PS4, Xbox One