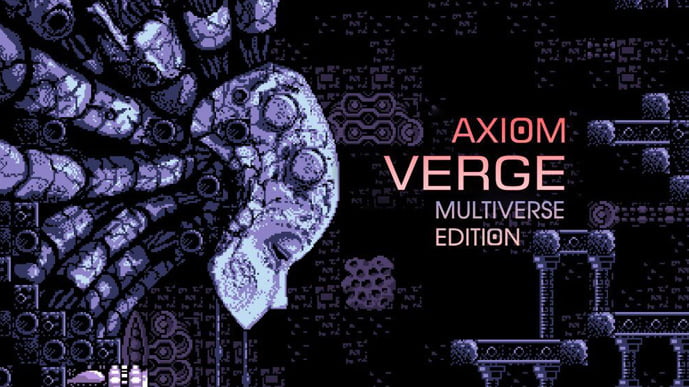 Axiom Verge: Multiverse Edition is heading to Switch, PS4, Vita, and Wii U… but not the Xbox One.

Thomas Happ’s Axiom Verge is getting a rather lovely physical release courtesy of BadLand Games. Axiom Verge: Multiverse Edition includes a new documentary, a poster, and commentary booklet. Players who pre-order the release will also get a limited edition CD soundtrack.

The soundtrack will also be bundled with all copies of the Switch edition, in what seems to be the de rigueur method of off-setting the higher price of multi-platform retail releases on Nintendo’s new console. And although the game is already available digitally on Xbox One, it appears that a physical release is not on the cards. A Wii U version, however, is.

2 Player Productions – best known for Minecraft: The Story of Mojang and Double Fine Adventure! – have also worked with Happ to create an “emotive behind-the-scenes account” of the game’s creation. The documentary charts its five-year development, and looks at the games that inspired Happ. We wonder what they could be?

In a press statement, Happ says:

“People often asked me about the early days of Axiom Verge – about how I was able to make a game completely on my own over the course of five years of evenings and weekends while holding down a full-time job. The long-form documentary format really made it possible for me to take the time and explain that process as well as go into some detail about the difficulties of balancing work and family responsibilities.”

Axiom Verge: Multiverse Edition will be available on PlayStation 4, PlayStation Vita, Wii U, and Nintendo Switch this August 2017.