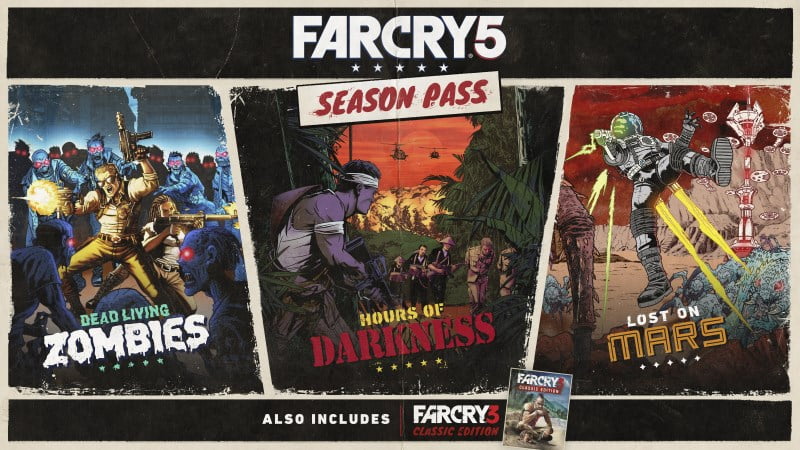 Ubisoft reveal the contents of the Far Cry 5 season pass, which includes some frightfully weird additions and an old friend.

You’ve been to Montana, you beat the cult, and you even got the hideous figurine of the cult’s leader. What do you do next, in Far Cry 5’s world?

For those of you who pick up the season pass or Gold Edition on console, you’ll also receive all of the single-player story content from Far Cry 3 Classic Edition as an added bonus, which is nice.

All of that stuff seems quite far-fetched, though, doesn’t it? Between the time travel and the zombies and the Martians, and then playing a different game from the series entirely, the Far Cry 5 season pass seems to be working quite hard to take you away from its more domestic – and ultimately, much more unsettling as a result – slice of (far-)right-on-your-doorstep Americana.

Which is a shame. All of that stuff from the main game, the stuff that’s making people feel uncomfortable? That’s what makes Far Cry 5 the most interesting game in the series for a long time.

Among Us accounts coming in December, new map in the works

Towards entropy: Time and death in Dishonored

Xbox to launch new consoles with global livestream on November 10