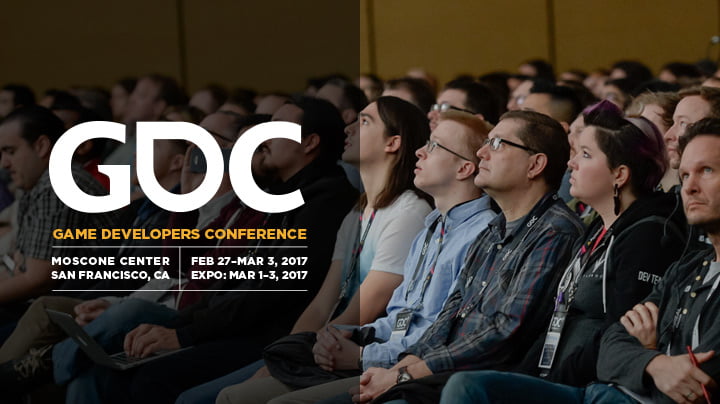 The Game Developers Conference (GDC) returns to the Moscone Convention Center in San Francisco, running from 27th February to 3rd March. Here’s our pick of the sessions announced so far, and details of early registration.

VRDC, which debuted to huge success last year, also makes a comeback with a range of sessions offering insight and expertise on developing games for Virtual Reality.

Here’s our pick from the 350+ sessions, tutorials, roundtables and bootcamps announced so far. It’s also worth noting that the conference’s early bird pricing ends on Wednesday, January 18, 2017. Full details can be found below.

Putting a game into Early Access is a simple and easy decision for most developers to take but there’s more to consider before you do than you might think. Brian Hicks, creative director of DayZ, talks about the lessons learned after three years working on one of Early Access’s most successful titles. The talk will explain the risks, unexpected resource requirements and challenges of putting a game in the public domain before it’s finished.

With Horizon: Zero Dawn Guerrilla Games have moved from developing linear, first person shooters to a creating a huge, open world RPG. The change of direction required a complete rebuild of the studio’s tools pipeline. Dan Sumaili’s talk will explain how the studio defined and implemented a framework that provides a solid basis of functionality, upon which they have built an integrated game development environment.

This talk, from Oxenfree’s co-creator Sean Krankel, will explore the various design decisions that went into creating the acclaimed supernatural thriller. It will examine how the studio strived to merge storytelling and game mechanics as closely as possible, as well tell a story that is both personal and novel.

Save Yourself: Game History is in Your Hands | Advocacy | Laine Nooney

Professional game historian, Laine Nooney, will explain how everyday artefacts and documents can be turned into compelling narratives. She will share stories from her own hunt for game history and demonstrate how industry professionals can start a personal archive to ensure that the ongoing history of game development continues to be recorded for future analysis.

Mick Gordon’s talk looks at the compositional process and production techniques for the aggressively wonderful Doom soundtrack. Gordon will use behind-the-scenes videos, pre-release examples and real anecdotes to reveal the creative and technical processes used to score the game.

Get Journalists to Cover Your Game | Business & Marketing | Thomas Reisenegger

Thomas Reisenegger will give in insight into why some games manage to get press and YouTube coverage and others don’t. The talk will show how studios can create effective PR communications and will also give an overview of how the Western media landscape operates. Attendees will also find out the five golden rules for getting their games covered by the press and social media influencers.

Classroom stalwart, Oregon Trail, played an important role in US schools during the ’80s and ’90s. Don Rawitsch’s talk will reveal the details behind serendipitous invention of the game, examine why it has remained popular, and explore its influence on other games.

Other classic game postmortems at GDC this year include Sid Meier discussing the original Civilization, Yutaka Saito looking back at Seaman, and Warren Spector chewing over Deus Ex.

When you hear the word re-master these days you can be forgiven for rolling your eyes. They can often be little more than a resolution bump and an increase in frame rate. The re-masters for Day of the Tentacle and Grim Fandango were different, however. Oliver Franzke and Mark Cooke’s talk will reveal how they attempted to capture the intended spirit of the original games when freed from the restraints of technology. The talk will also cover the process for re-mastering graphics, gameplay and audio, as well as dealing with bugs found in ancient code.

Sound plays an intrinsic – and instantly recognisable – part in the Star Wars universe. In this talk attendees will learn how Criterion Games used sound effects and music to generate a feeling of scale and wonder in Star Wars: Battlefront VR, as well as creating a sense of presence and interactivity in the game’s virtual X-Wing cockpit.

Early registration for GDC 2017 ends on Wednesday 18th January, 2017. Until then there are discounted rates available. All conference pass holders also get access to the GDC Expo Floor, which features exhibits showcasing new technology as well as the Game Careers Seminar and the Independent Games Festival exhibit.

Check out the full GDC programme at the official session scheduler.