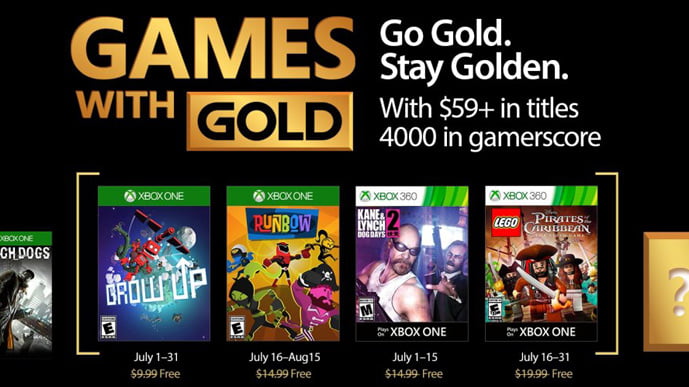 Microsoft has revealed the Xbox Live Games With Gold lineup for July 2017.

The fun begins on July 1st with Ubisoft’s charming platformer, Grow Home. It’s a slight game, but inventive, bright, and beautiful. We wouldn’t go as far as calling it a hidden gem, but if you missed it first time round, it’s well worth a look.

Also released on July 1st is the Xbox 360’s Kane & Lynch 2, which is also available on Xbox One via Backwards Compatibility. IO Interactive’s third-person shooter was much-maligned upon its original release, but undergone something of a reappraisal in recent years. Our very own Miguel Penaballa gives the game a second shot, here.

July 16th sees the addition of riotous party game, Runbow, and the chance to play plastic Jack Sparrow in LEGO Pirates of the Caribbean.

Xbox 360 (also compatible with Xbox One)

Check out this month’s PlayStation Plus games.