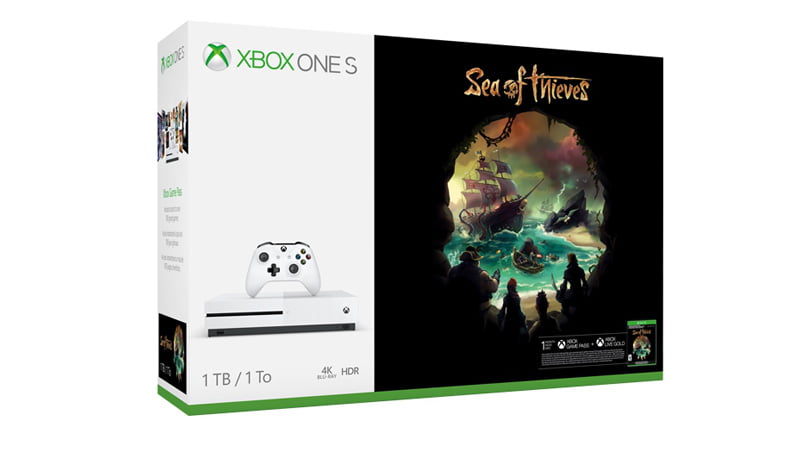 Microsoft announces a new Xbox One S Sea of Thieves bundle for release next month.

Want an Xbox One S, but don’t want the new PUBG bundle? Well, shiver me timbers, you’re in luck. An Xbox One S Sea of Thieves bundle will be released worldwide on March 20, 2018.

Rare’s online pirate adventure is one of the highlights in Microsoft’s 2018 first-party lineup. Feedback from the recent betas has been overwhelmingly positive, and despite a few raised eyebrows over its micro-transaction roadmap, the game looks to be shaping up nicely.

Sea of Thieves’ importance is reflected in it being the first major first-party game to get a day-and-date release on Xbox Game Pass, and now, with it receiving a dedicated hardware SKU.

The Xbox One S Sea of Thieves bundle will be available from March 20, 2018, and is priced at $299.99 in the US. The pack includes a white Xbox One S console with a 1TB hard drive, an official wireless controller, and a full-game download for Sea of Thieves.

Other goodies include a one month Xbox Live Gold subscription, and a one month Xbox Game Pass trial. The inclusion of the latter is curious, given that Game Pass will include Sea of Thieves among its lineup. Let’s hope the game can keep its sea legs for longer than a month, and justify the separate purchase.

A limited edition Sea of Thieves controller is also available for $74.99, and comes with an exclusive Ferryman clothing set.